The Gentrification of the Internet: How to Reclaim Our Digital Freedom (Hardcover) 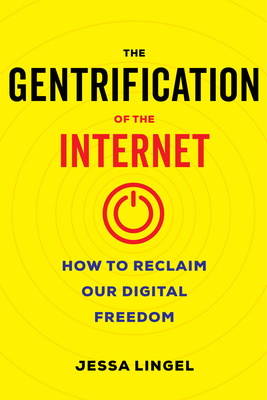 The Gentrification of the Internet: How to Reclaim Our Digital Freedom (Hardcover)


Usually Ships in 1-5 Days
How we lost control of the internet—and how to win it back.

The internet has become a battleground. Although it was unlikely to live up to the hype and hopes of the 1990s, only the most skeptical cynics could have predicted the World Wide Web as we know it today: commercial, isolating, and full of, even fueled by, bias. This was not inevitable. The Gentrification of the Internet argues that much like our cities, the internet has become gentrified, dominated by the interests of business and capital rather than the interests of the people who use it. Jessa Lingel uses the politics and debates of gentrification to diagnose the massive, systemic problems blighting our contemporary internet: erosions of privacy and individual ownership, small businesses wiped out by wealthy corporations, the ubiquitous paywall. But there are still steps we can take to reclaim the heady possibilities of the early internet. Lingel outlines actions that internet activists and everyday users can take to defend and secure more protections for the individual and to carve out more spaces of freedom for the people—not businesses—online.
Jessa Lingel is Associate Professor at the Annenberg School of Communication at the University of Pennsylvania. In Philadelphia, she works with the Creative Resilience Collective and the Workers Solidarity Network.

“The Gentrification of the Internet presents an accurate and accessible description of the current power imbalances taking place online. It pushes activists and users alike to start acting now and provides realistic examples and suggestions moving forward.”

"In a moment of increasing nihilism about the role of the internet and the ability of regular people to resist a descent into a technology-driven dystopia, The Gentrification of the Internet offers a starting point for action, grounded in the reality of gentrification activism with proven results."
— Lateral: Journal of the Cultural Studies Association