From Fascism to Populism in History (Paperback) 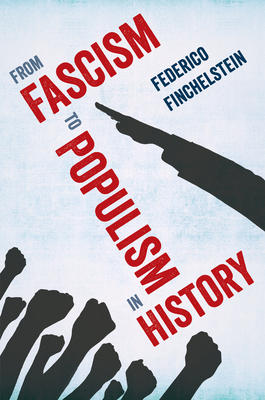 What is fascism and what is populism? What are their connections in history and theory, and how should we address their significant differences? What does it mean when pundits call Donald Trump a fascist, or label as populist politicians who span left and right such as Hugo Chávez, Juan Perón, Rodrigo Duterte, and Marine Le Pen? Federico Finchelstein, one of the leading scholars of fascist and populist ideologies, synthesizes their history in order to answer these questions and offer a thoughtful perspective on how we might apply the concepts today. While they belong to the same history and are often conflated, fascism and populism actually represent distinct political trajectories. Drawing on an expansive record of transnational fascism and postwar populist movements, Finchelstein gives us insightful new ways to think about the state of democracy and political culture on a global scale. This new edition includes an updated preface that brings the book up to date, midway through the Trump presidency and the election of Jair Bolsonaro in Brazil.

Federico Finchelstein is Professor of History at the New School for Social Research and Eugene Lang College in New York City. He is the author of several books, including Transatlantic Fascism and The Ideological Origins of the Dirty War. He contributes to major American, European, and Latin American media, including the New York Times, Washington Post, The Guardian, Mediapart, Politico, Clarin, Nexos, and Folha de S.Paulo.

“The historiography rests on three basic assumptions, all of which are usefully questioned in Federico Finchelstein’s From Fascism to Populism in History. One is that fascism not only originated in Europe but was primarily a European phenomenon. Another is that it was historically specific to those interwar years. The third: that fascism involved a repudiation of democracy, a kind of pathology of political development. . . . An expert on the modern history of Argentina, Finchelstein reminds us that the second world war marked a turning point. Before it, fascists were filled with confidence: they wrote off democracy as an outmoded relic of the 19th century, and claimed fascism as the future. . . . ”
— Financial Times

"Is Trump fascist? A proto-fascist? Fascist-curious? In his thoughtful new book, From Fascism to Populism in History, New School historian Federico Finchelstein concedes that Trump’s campaign 'had clear fascist and racist undertones,' and he cites the 'fascist pedigree' of Trump’s 'America first' slogan."
— The Washington Post

"From Fascism to Populism in History serves the important purpose of reminding us that populism was in evidence throughout the twentieth century, especially in Latin America, and thus is a global phenomenon of long standing."
— Survival: Global Politics and Strategy

"Federico Finchelstein defies this overcrowded field and presents a historical account of the roots of populism that offers a fresh take on what has become common understanding in the fields of history, sociology, and political science. ...  essential for students of contemporary politics, political ideologies and political sociology."
— Journal of Cultural and Political Sociology

"A timely and commendable analysis."
— The Quarterly Review

"What happened to us?—a very Argentine historiographical question—seems to be the underlying motivation for current American concerns with populism. Finchelstein contributes to this a passionate global perspective and a cosmopolitan sense of civic engagement. From Fascism to Populism weaves together historiographies and theories that are not often in conversation with each other. . . . This is, thus, a provocative, important, and also at times exasperating book, destined to inspire new histories and fire up many heated debates. Passion endows Finchelstein’s narrative with clairvoyance and urgency."
— American Historical Review

"Finchelstein combines original research on many countries with a superb synthesis and critical examination of the literature on fascism and populism. A short review cannot do justice to his provocative insights. . . . Timely and fascinating."
— Hispanic American Historical Review

"Federico Finchelstein offers what sounds like a timely clarification of political nomenclature with From Fascism to Populism in History, which argues that, despite belonging to ‘the same history and [being] often conflated, fascism and populism actually represent distinct political and historical trajectories.’”
— Inside Higher Education