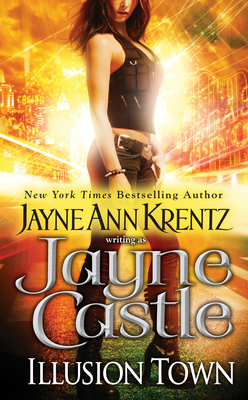 This is book number 14 in the A Harmony Novel series.

A new adventure begins on Harmony…

With its opulent casinos and hotels, the desert city of Illusion Town is totally unique—and will take you on a thrill ride you’ll never forget.

Hannah West isn’t the first woman to wake up in Illusion Town married to a man she barely knows, but she has no memory of the ceremony at all. For that matter, neither does Elias Coppersmith, her new husband. All either can remember is that they were on the run…

With Hannah’s dubious background and shaky para-psych profile, she could have done much worse. The cooly competent mining heir arouses her curiosity—as well as other parts of her mind and body. And even her dust bunny likes him.

But a honeymoon spent retracing their footsteps leads Hannah and Elias into the twisting underground catacombs, where secrets from both their pasts will come to light—and where the energy of their clashing auras will grow hot enough to burn…
Jayne Castle is a pseudonym for Jayne Ann Krentz, the author of more than fifty New York Times bestsellers. She writes futuristic romance novels under the Castle name, contemporary romantic suspense novels under the Krentz name, and historical romance novels under the pseudonym Amanda Quick. There are more than 35 million copies of her books in print.
Praise for Siren’s Call

“Like a siren herself, Castle expertly lures readers in with inventive plotting, wit-infused writing, and flawless characterization in the latest deliciously sexy addition to her consistently entertaining, fantasy-laced Rainshadow series.”—Booklist (starred review)

“A pleasant pas de deux in which a liberated woman meets a dangerous hunk who lusts after both her curves and her cerebrum. Castle adroitly lets the sparks fly in this cozy escapist story.”—Publishers Weekly