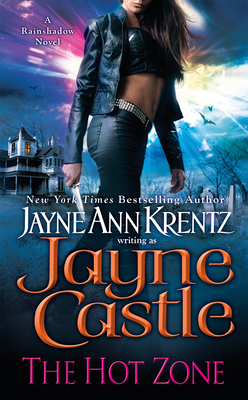 This is book number 12 in the A Harmony Novel series.

The world of Harmony has its wonders, one of them being Rainshadow Island.
Just beneath its surface, a maze of catacombs hides a dangerous secret…

Halloween—with its tricks and treats—is a dust bunny’s dream come true. Just ask Lyle, Sedona Snow’s faithful sidekick. But for Sedona, it’s a nightmare. Though her new job managing a small hotel and tavern on Rainshadow is helping her move on from her tragic past, a bizarre disaster down in the catacombs has brought a pack of rowdy ghost hunters to her inn.

And now, Sedona’s ex has arrived on the island, claiming he wants to get back together, just as a newcomer appears to have a strong interest in her. Cyrus Jones is the new Guild boss in town. He has his own agenda when it comes to Sedona, but even the best-laid plans are no match for the passion that springs up on Rainshadow…
Jayne Castle is a pseudonym for Jayne Ann Krentz, the author of more than fifty New York Times bestsellers. She writes futuristic romance novels under the Castle name, contemporary romantic suspense novels under the Krentz name, and historical romance novels under the pseudonym Amanda Quick. There are more than 35 million copies of her books in print.
Praise for Deception Cove

“Castle serves up another riveting installment in her futuristic Harmony series, and the resulting fast-paced, witty, sexy romance is guaranteed to keep readers enthralled.”—Booklist

“The perfect recipe for hours of reading pleasure.”—RT Book Reviews

“Jayne Castle, one of the pioneers of the futuristic subgenre, continues to set the standard against which all other such books are judged.”—Affaire de Coeur

“As always, the characterizations and plot blend perfectly for a thrilling, funny, and fully satisfying read.”—RT Book Reviews (4½ stars)