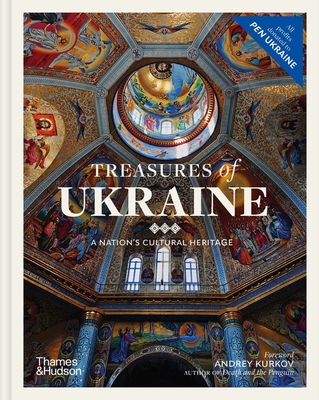 A celebration of Ukraine’s rich cultural heritage bringing to light the country’s most important works of art and architectural monuments from prehistory to the present.

Treasures of Ukraine chronicles the arts and heritage of Ukraine at a time when the country’s people, culture, landmarks, and artworks are facing destruction and devastation. Created in partnership with a group of renowned artists, curators, and critics, this record of architectural monuments and artworks reaches from prehistory to the present day.

Organized chronologically across eight chapters, Treasures of Ukraine contains more than 220 color images that showcase everything from Scythian gold, Byzantine icons, and wooden churches to gold-domed cathedrals, avant-garde masterpieces, and political art after the Orange Revolution, while accompanying texts reveal the history and significance behind the pieces. Examples of vernacular art weave Ukraine’s dynamic and inextinguishable folk narrative through the book, providing visual texture as well as a sense of the nation’s living history.

This is a compelling account of Ukraine’s history, told through the prism of a carefully curated selection of key monuments, architectural landmarks, and works of art. All proceeds will go to PEN Ukraine, to help Ukrainian authors in need.

Andriy Puchkov is a specialist in Ukrainian architecture and author of more than two dozen monographs.

Christian Raffensperger is professor of history and department chair at Wittenberg University.

Diana Klochko is a prominent art historian and author of 65 Masterpieces of Ukrainian Art.

Maksym Yaremenko is a Professor at the Department of History at the National University of Kyiv-Mohyla Academy.

Myroslava M. Mudrak is Professor Emeritus of Art History at the Ohio State University and a member of the National Academy of Arts of Ukraine.

Oleksandr Soloviev is a leading art critic and an expert in Ukrainian contemporary art.

Victoria Burlaka specializes in contemporary art.
A timely reminder of how much is at stake in the ongoing war with Russia... Features a broad range of Ukrainian art... Much of Ukraine's art is tied to religion...but as this book shows, Ukraine is no stranger to Modernism, Art Nouveau or the Avant-garde.
— NPR

A corrective to Putin's version of history, in which Ukraine has been nothing more than a part of Russia... Introduced by the novelist Andrey Kurkov, the book features eight Ukrainian academics, curators and art critics writing about works of art created inhabitants of the region, from Scythian stone stelae of the 6th century B.C. to recent videos made by graduates of the National University of Cinema in Kyiv.
— The Washington Post

With chapters on Orthodox icons and Catholic cathedrals, Soviet avant-gardism and nationalist folk crafts, this book illustrates a culture whose very diversity now puts it in danger.
— The New York Times

This gorgeous book documents the history of Ukrainian art and culture through more than 220 photographs of the country’s religious buildings, masterpieces, architectural monuments, and more.
— Washingtonian