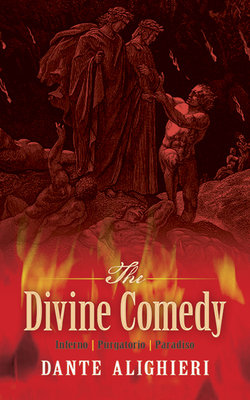 
Email or call for price
This convenient single-volume edition contains all three parts of Dante's 14th century poem ― Inferno, Purgatorio, and Paradiso ― in an acclaimed translation by American poet Henry Wadsworth Longfellow. Combining classical and Christian history as well as medieval politics and religion, this trilogy of sublime verse is among Western civilization's most important artistic works and essential reading for students of literature and history.
Dante's allegory of the soul's journey to God begins with Inferno, in which the narrator traverses the underworld in the company of the ancient Roman poet Virgil. As they travel through the nine circles of Hell, the poets encounter historical and mythological figures suffering symbolic punishments for their earthly crimes. In Purgatorio, Dante continues on alone through the realm of redemption, where departed souls reflect upon their sins and work toward their moral improvement. The tale culminates in Paradiso, where the divine Beatrice guides Dante in the final stage of his intellectual journey from doubt to faith.
Florentine poet Dante Alighieri (1265-1321) is best known for The Divine Comedy, a three-part epic poem that progresses from Hell to Purgatory to Paradise. Written in the vernacular, rather than Latin or Greek, Dante's masterpiece immediately found a wide audience; it is considered the greatest work of Italian literature and its author is regarded as the father of modern Italian. Henry Wadsworth Longfellow (1807-1882), author of The Song of Hiawatha and other beloved poems, was Professor of Modern Languages at Harvard University.