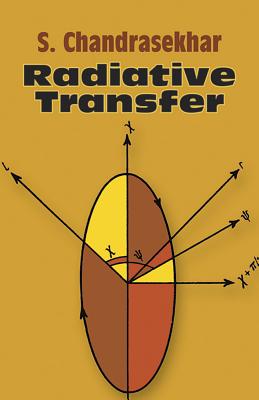 
Usually Ships in 1-5 Days
(This book cannot be returned.)
Radiative Transfer is the definitive work in the field. It provides workers and students in physics, nuclear physics, astrophysics, and atmospheric studies with the foundation for the analysis of stellar atmospheres, planetary illumination, and sky radiation. Though radiative transfer has been investigated chiefly as a phenomenon of astrophysics, in recent years it has attracted the attentions of physicists as well, since essentially the same problems arise in the theory of diffusion of neutrons. -- Morton D. Hall, Distinguished Service Professor, University of Chicago
Chandrasekhar presents the subject of radiative transfer in plane-parallel atmosphere as a branch of mathematical physics, with its own characteristic methods and techniques. He begins with a formulation and analysis of fundamental problems. It is shown how allowance can be made for the polarization of the radiation field by using a set of parameters first introduced by Stokes. Successive chapters deal with transfer problems in semi-infinite and finite atmosphere; Rayleigh scattering; the radiative equilibrium of a stellar atmosphere; and related astrophysical and mathematical problems. The mathematical methods employed are extremely powerful, and by means of them it has been possible to handle problems which could not be treated previously, such as the scattering of polarized light.
Indian-born astrophysicist S. Chandrasekhar (1910-95) was a Professor of Physics at the University of Chicago and a co-recipient of the 1983 Nobel Prize for Physics. NASA's Chandra X-Ray Observatory is named for him (chandra also means moon or luminous in Sanskrit). Subrahmanyan Chandrasekhar: A Shining Star The great Indian astrophysicist Subrahmanyan Chandrasekhar (1910-1995), recipient of the Nobel Prize in Physics in 1983 for his work on the later evolutionary stages of massive stars, was not only the author of several books reprinted by Dover over many years, but a frequent and highly valued reviewer of titles in his field during the 1970s and 1980s. Chandrasekhar's books, published by Dover, are: An Introduction to the Theory of Stellar Structure, 1967; Hydrodynamic and Hydromagnetic Stability, 1981; Principles of Stellar Dynamics, 2005; Ellipsoidal Figures of Equilibrium, 1987; and Radiative Transfer, 1960. For those concerned with the distant future ― the really distant future ― Chandrasekhar's name will always be associated with the Chandrasekhar Limit, the figure of 1.44 solar masses, the minimal mass above which a dying star will collapse into a black hole following a supernova. People on Earth need not be bothered anticipating such drama: for us, when the sun dies, the lights will just go out. In astrophysical terms, our sun will at that point be a stable white dwarf. Critical Acclaim for Subrahmanyan Chandrasekhar: Any new fact or insight that I may have found has not seemed to me as a 'discovery' of mine, but rather something that had always been there and that I had chanced to pick up. I discovered true mathematical elegance from Subrahmanyan Chandrasekhar. ― Carl Sagan