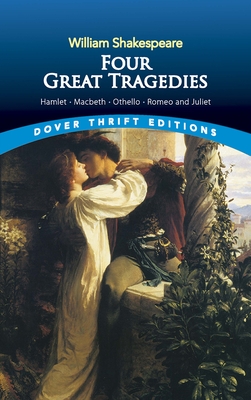 
Usually Ships in 1-5 Days
(This book cannot be returned.)
Among the most studied, most read, and most admired works in world literature, the tragedies of Shakespeare constitute a body of work unrivaled in dramatic brilliance, beauty of language, and profundity of thought. This convenient and affordable volume--ideal for students and all lovers of literature--features four of the playwright's greatest works: Hamlet, the revenge drama centering on the introspective Prince of Denmark--one of literature's most discussed and contentious characters, and the role that every actor longs to play; Macbeth, otherwise known as The Scottish Play, concerning a nobleman's overweening ambition; Othello, in which a gallant soldier and loving husband is undone by jealousy; and Romeo and Juliet, the timeless tale of the young lovers whose names are synonymous with star-crossed romance.
He was not of an age, but for all time, declared Ben Jonson of his contemporary William Shakespeare (1564-1616). Jonson's praise is especially prescient, since at the turn of the 17th century Shakespeare was but one of many popular London playwrights and none of his dramas were printed in his lifetime. The reason so many of his works survive is because two of his actor friends, with the assistance of Jonson, assembled and published the First Folio edition of 1623.