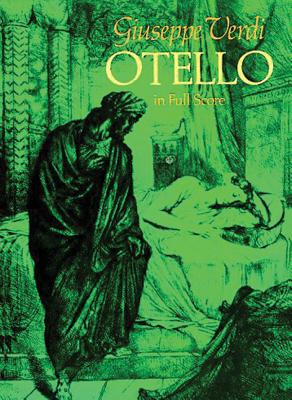 Perhaps the most remarkable feature of 'Otello' is not its great set pieces, wonderful as these are, but the fluid melodic and dramatic recitative that links them and binds the whole together. Many composers have dreamed of such a thing -- a flexible vocal line, responsive to every mood and accent of the words, and yet consistently interesting in itself, as melody, as music. Very few have attained it. -- The Grove Dictionary of Music and Musicians.
Written in his 74th year and first performed at La Scala in 1887, Otello, Verdi's penultimate opera, is his tragic masterpiece. Only the comic Falstaff, also adapted from Shakespeare, and also with an inspired libretto by Boito, would follow. Technically and aesthetically in their mastery of orchestration, harmony, and vocal writing, these final works represent a profound leap forward from the earlier Verdi triumphs, a summation of his brilliant compositional powers.
Reproduced from the authoritative Ricordi edition, this modestly priced Dover volume makes accessible the complete, unabridged score of Otello, one of the most frequently performed and recorded operas ever composed. The original front matter -- including characters, contents, and instruments -- has been translated from the Italian specially for this edition.
Verdi had an unfailing sense of the stage and Otello, with its superb libretto and its forceful dramatic construction, is perhaps his most accomplished theatrical work. Scholars, performers, and opera lovers will welcome this clear, inexpensive, durable volume, which reproduces one of the undisputed masterpieces of the form by the composer who not only changed the face of Italian opera but also was a major influence in the transformation of opera into music drama.

An Italian composer of the Romantic era, Giuseppe Verdi (1813-1901) wrote operas that remain standards of the repertoire more than a century after his death. His most popular works include Rigoletto, La Traviata, and Aida.