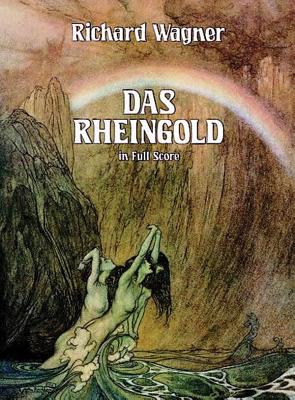 Das Rheingold, the first opera in Wagner's celebrated four-part Ring Cycle, blends the powerful imagery of Norse and Teutonic mythology with glorious, robustly inventive music to produce a dramatic allegory of greed and lust for power. Despite its popularity, however, Das Rheingold has long been difficult to find in complete score -- until now. This handsome volume reproduces the full orchestral and vocal score in a clear engraving with large, legible notation for easy reading and study. This is the complete, authoritative B. Schott's S hne edition with newly translated front matter, including Wagner's poetic tribute to his patron and benefactor, King Ludwig II of Bavaria. Virtually nowhere else will you locate this masterpiece in such an eminently usable format, at such a remarkably affordable price. Music lovers, opera buffs, musicologists -- any admirer of Wagner -- will welcome Dover's full, reliable edition of this magnificent music-drama in its entirety.

Composer and conductor Richard Wagner (1813-83) is best known for his four-opera classic, The Ring. Unlike most other composers, Wagner wrote both the scenario and libretto for his operas.