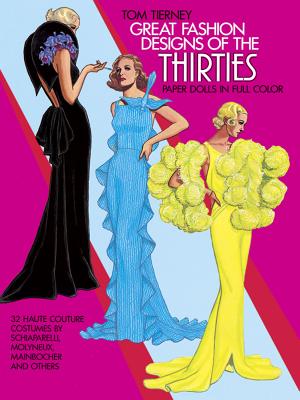 Out of Print
(This book cannot be returned.)
The 1930s ... they began somewhat unstylishly in the midst of a worldwide depression but ended as a dazzling and influential decade of haute couture. Influenced by the Bauhaus movement ("Form follow function") and the Art Deco trend, a coterie of brilliant designers set the tone for the times with an exciting new wave of provocative fashions.
Here, in a handsome, painstakingly researched paper doll fashion book, noted artist and fashion authority Tom Tierney re-creates the exquisite inventions of the top couturiers: Schiaparelli, Lanvin, Vionnet, Molyneux, Chanel, Mainbocher, Worth, Paquin, and others. Rendered in glowing full color, the collection comprises two dolls and 32 meticulously detailed costumes, accurate down to the last nuance of fabric and fold.
Suddenly out is the "boyish look" of the Roaring Twenties. It is a more seductive line. In the 30s, skirts take on a clinging fluidity, hats get smaller, gloves of every length are la mode, and the backless evening gown makes a dramatic entrance. By 1933, Paris turns to Hollywood for inspiration and film stars Gloria Swanson, Joan Crawford, and Garbo are the new international fashion setters. (Tierney's dolls bear striking resemblances to the first two actresses.)
Fashion connoisseurs will delight in this parade of stunning costumes, featuring a navy wool frock with sable-bordered cape-scarf and muff by Worth; an elegant gold lam evening gown with gathered peplum flounce by Lanvin; a Chanel creation of white tulle with sunburst stitching; Schiaparelli's "Chinese" taffeta cape and satin dress; and dozens of other inspiring designs. An informative text describes fabrics and accessories and lists the date of the creation and the designer's name. This charming, inexpensive haute-couture collection will appeal to paper doll enthusiasts, costume fanciers, fashion historians, and anyone interested in the fascinating 30s.
One of the leading authorities on fashion history, Tom Tierney created over 150 paper doll books for Dover Publications. With subjects ranging from U.S. Presidents to popular movie stars, Mr. Tierney's books are famous for being carefully researched and meticulously rendered. His releases are prized by fashion professionals, collectors, and paper doll lovers all over the world.