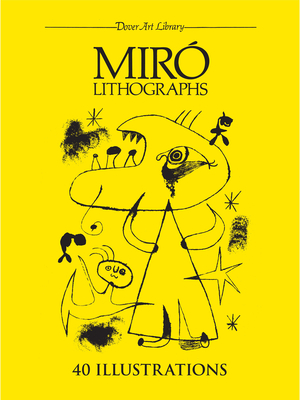 As regards my means of expression, I try my hardest to achieve the maximum of clarity, power, and plastic aggressiveness; a physical sensation to begin with, followed up by an impact on the psyche. -- Mir
Mir 's line recalls Picasso's in clarity and power; the Catalan's plastic aggressiveness led him, as it did his Andalusian friend, to bold, successful experiment and innovation in ceramics, sculpture and printmaking, especially lithography. The lithographic print medium suited and encouraged the artist's lifelong, often radical, obsession with stripping art to the marrow. The 40 plates reproduced here sample the pith of his lithographic production -- a series produced in 1944, full of the eerie images and droll distortion he had sought on canvas for decades.
It's never easy for me to talk about my painting, wrote Mir , since it is always born in a state of hallucination induced by some kind of shock, objective or subjective, for which I am not personally responsible in the least. Mir hallucinates on stone for these prints, filling them with monstrous beasts and one-eyed aliens adrift in a heaven of moons and stars and black nebulae, floating breasts and generative organs. These lithographs were executed shortly after finishing the famous constellation series of paintings (called by one critic the most intricate, most elaborately developed of all Mir 's compositions), right around the time his mother died and he fired his first ceramics in collaboration with Artigas. Falling in a period of intense creative mingling of whimsy with the grotesque, these prints characterize an important juncture in Mir 's career. They also enlarge the boundaries of lithographic technique as they simultaneously show Mir , now stripped of his brilliant colors, to be an equal master of black-and-white.