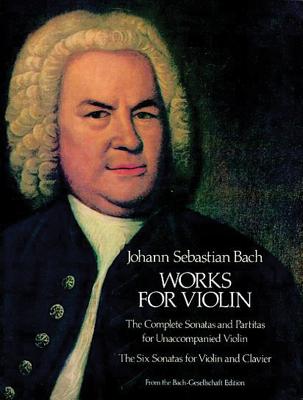 The renowned Bach-Gesellschaft, founded in 1850 to collect, edit, and publish all the known works of J. S. Bach, devoted 50 years to its monumental task. It endeavored to establish the authoritative, accurate texts that remain the primary sources for Bach's music. Unfortunately, it has always been a fantastically expensive publication, accessible only in the largest libraries.
This book reprints in text directly from the Bach-Gesellschaft editions the following important works for the violin:
Sonatas and Partitas for Unaccompanied Violin, Sonata No. 1 in G Minor, Partita No. 2 in D Minor, Partita No. 1 in B Minor, Partita No. 3 in C Major, Sonata No. 2 in A Minor, Partita No. 3 in E Major, Sonatas for Violin and Clavier, No. 1 in B Minor, No. 4 in C Minor, No. 2 in A Major, No. 5 in F Minor, No. 3 in E Major, and No. 6 in G Major.
These popular works, basic to the classical violin repertoire, are frequently performed in concert, and numerous recordings are available. The music has been reproduced in a size large enough to be read easily, with large noteheads, wide margins for written notes, fingerings, etc., and on opaque paper with sturdy, sewn bindings. Pages lie flat and will not fall out. Designed as a playing edition, this volume belongs in the library of every serious violinist as wells those of musicologists, students, and music lovers.

Johann Sebastian Bach (1685-1750) was a prolific German composer and organist whose sacred and secular works for choir, orchestra, and solo instruments exemplify the heart and soul of the Baroque period. A revival of interest and performances of his music began early in the 19th century and continue to this day. He is now widely considered to be one of the greatest composers in the Western tradition.