Lost Kingdom: The Quest for Empire and the Making of the Russian Nation (Hardcover) 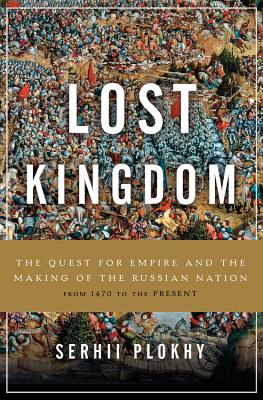 Lost Kingdom: The Quest for Empire and the Making of the Russian Nation (Hardcover)


Usually Ships in 1-5 Days
From a preeminent scholar of Eastern Europe and the prizewinning author of Chernobyl, the essential history of Russian imperialism.

In 2014, Russia annexed the Crimea and attempted to seize a portion of Ukraine -- only the latest iteration of a centuries-long effort to expand Russian boundaries and create a pan-Russian nation. In Lost Kingdom, award-winning historian Serhii Plokhy argues that we can only understand the confluence of Russian imperialism and nationalism today by delving into the nation's history. Spanning over 500 years, from the end of the Mongol rule to the present day, Plokhy shows how leaders from Ivan the Terrible to Joseph Stalin to Vladimir Putin exploited existing forms of identity, warfare, and territorial expansion to achieve imperial supremacy.

An authoritative and masterful account of Russian nationalism, Lost Kingdom chronicles the story behind Russia's belligerent empire-building quest.
Serhii Plokhy is the Mykhailo Hrushevsky Professor of Ukrainian History and director of the Ukrainian Research Institute at Harvard University. The New York Times bestselling author of The Gates of Europe and Nuclear Folly, Plokhy is an award-winning author of numerous books. He lives in Burlington, Massachusetts.

"[A] sweeping study... Mr. Plokhy seeks to explain the centrality of the so-called western provinces to Russian identity. This is not merely an intellectual exercise but one closely linked to contemporary geostrategic debates. As Mr. Plokhy writes: 'The question of where Russia begins and ends, and who constitutes the Russian people, has preoccupied Russian thinkers for centuries.' ... his study...show[s] why this question is of such importance."—Wall Street Journal

"The kind of magisterial history that only a seasoned historian with full command of his field can write... [a] masterful text."—Russian Review

“Engaging… Plokhy paints a rich and colorful picture of the historical events that influenced debates about Russia’s conception of its geopolitical position.”—Michigan War Studies Review

"A timely work of
impeccable research that elucidates the Russian impulse toward regaining lost
lands under a powerful myth of origins.... Plokhy continues to show that he is the
master of this terrain."—Kirkus Reviews

"In Lost Kingdom, Serhii Plokhy does for Russia what only great historians can do -- make the connections between the distant past and vital present feel relevant and alive. He brings Russia's centuries of struggle with nationalism and imperialism into the near focus of Vladimir Putin's ongoing invasion of Ukraine and annexation of Crimea. Lost Kingdom carefully and colorfully relates how the fires of history and myth burned from before the first tsars to Peter the Great, through the Bolsheviks, World War II, and the fall of the Soviet Union. With Russia everywhere in the news today, and every pundit pretending to be an expert, Lost Kingdom is essential reading for those wishing to understand Russia beyond the headlines."
—Garry Kasparov, author of Winter Is Coming: Why Vladimir Putin and the Enemies of the Free World Must Be Stopped

"Lost Kingdom is an erudite exploration of the contradictions of Russian nationalism, whose history shows it to be both inclusive and exclusive, universalistic and identitarian, often in quick succession or even simultaneously. A master historian on top of his game, Serhii Plokhy lays out the challenges this past presents for transforming Russia into a better country for its people and its neighbors."
—Odd Arne Westad, author of The Cold War: A World History

“Learned, engaging, and timely, Lost Kingdom recounts in fascinating detail the story of the Russian nation across several tumultuous centuries, from its earliest days up to the regime of Vladimir Putin. Internationally acclaimed historian Serhii Plokhy knows his subject like few others, and he writes with aplomb and a keen eye for the ironies, contingencies, and tragedies of this history. A book that should be read by everyone seeking to understand Russia today.”
—Douglas Smith, author of Rasputin: Faith, Power, and the Twilight of the Romanovs

“That said, to Plokhy’s enormous credit, he shows us these spirited contestations with ab-solute mastery. Though written with grace for a wide audience and spanning ?ve centuries in just 350 pages, this is a subtle, precise, and deeply learned book.”—Willard Sunderland, Journal of Modern History