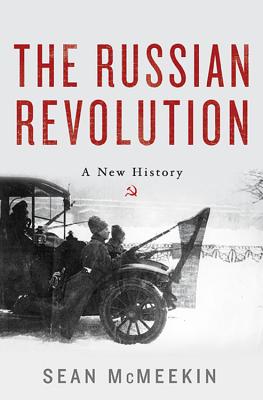 
Email or call for price
From an award-winning scholar comes this definitive, single-volume history that illuminates the tensions and transformations of the Russian Revolution.

In The Russian Revolution, acclaimed historian Sean McMeekin traces the events which ended Romanov rule, ushered the Bolsheviks into power, and introduced Communism to the world. Between 1917 and 1922, Russia underwent a complete and irreversible transformation. Taking advantage of the collapse of the Tsarist regime in the middle of World War I, the Bolsheviks staged a hostile takeover of the Russian Imperial Army, promoting mutinies and mass desertions of men in order to fulfill Lenin's program of turning the "imperialist war" into civil war. By the time the Bolsheviks had snuffed out the last resistance five years later, over 20 million people had died, and the Russian economy had collapsed so completely that Communism had to be temporarily abandoned. Still, Bolshevik rule was secure, owing to the new regime's monopoly on force, enabled by illicit arms deals signed with capitalist neighbors such as Germany and Sweden who sought to benefit-politically and economically-from the revolutionary chaos in Russia.

Drawing on scores of previously untapped files from Russian archives and a range of other repositories in Europe, Turkey, and the United States, McMeekin delivers exciting, groundbreaking research about this turbulent era. The first comprehensive history of these momentous events in two decades, The Russian Revolution combines cutting-edge scholarship and a fast-paced narrative to shed new light on one of the most significant turning points of the twentieth century.
Sean McMeekin is a professor of history at Bard College. The award-winning author of several books, including The Russian Revolution, July 1914, and The Ottoman Endgame, McMeekin lives in Red Hook, New York.

"With strong scholarly foundations and a riveting narrative, this book provides a broad survey of this tumultuous and fateful social transformation...This fluid work offers an overview of the revolution's wartime context."

"A fresh history of the revolution...McMeekin refreshingly doesn't muddy the waters with too many characters, but he is thorough in his treatment, which is that much more interesting due to the wealth of information released following the downfall of the Soviet Union...McMeekin effectively shows how easily one man could undermine the foundations of a nation, and he makes the revolution comprehensible as he exposes the deviousness of its leader."—Kirkus Reviews

"[A] superb and eye-opening account of this important chapter in 20th century history that will be indispensable reading for those anxious to learn more about this seminal event and the aftershocks that followed.... The Russian Revolution is a carefully researched, well-written assessment of the complex and confusing events that did so much to shape the last century. McMeekin is a reliable guide to a complex story and the book moves seamlessly and clearly across a vast landscape of people and events."
—Christian Science Monitor

"[A] powerful revisionist history... Sean McMeekin is a gifted writer with historical talents equal to the challenge of helping the reader to follow the events of the revolution and appreciate their terrible significance... And in a world menaced by new totalitarians, by political actors prepared to use conflict as a path to power, by states ready to use their money to suborn democracy elsewhere and by liberals often paralysed by in-fighting rather than united by principle, McMeekin's magisterial study repays careful reading."—Times (UK)

"It is a quarter of a century since Richard Pipes published his history of the Bolshevik seizure of power in the Russian empire, and twenty years since Orlando Figes's A People's Tragedy. Back then, in the wake of the Soviet collapse, those seemed definitive. But now comes Sean McMeekin with a vivid new account, drawing on fresh evidence and offering an original, geopolitical perspective. The full, shocking extent to which Lenin was a German operative now becomes clear, as does the magnitude of Kerensky's blunder in not finishing the Bolsheviks off before their "revolutionary defeatism" went viral. McMeekin writes muscular history. His Russian Revolution grips the reader."
—Niall Ferguson, senior fellow, the Hoover Institution, Stanford

"Sean McMeekin's new history of the Russian Revolution is, as always with his work, dynamic, compelling, and revisionist, telling the familiar story with vigour, accessibility, and elan but ornamented with fascinating new archival revelations on, amongst other things, German funding of the Bolsheviks."
—Simon Sebag Montefiore, author of The Romanovs

"The Tsar didn't fall, he wilted, and this briskly written, fresh take on the revolution sketches the process in poignant detail-orgies, vodka, Rasputin, pogroms, plots, and war on the Eastern Front. McMeekin's Lenin is more seedy than heroic, his Bolshevik victory an act of treason engineered by a German army that had stuffed a billion dollars in Lenin's pockets before the bourgeois exile mounted his first barricade in Petrograd."
—Geoffrey Wawro, author of A Mad Catastrophe

"This is a book that we have been waiting for. The Russian Revolution is an enormous subject, and to write a short and authoritative book on it is very difficult indeed. Sean McMeekin brings many gifts to the task, not the least of which is that he can describe crowd scenes with immediacy. It should count as a classic."
—Norman Stone, author of The Eastern Front 1914-1917

"In vivid colors, Sean McMeekin presents a provocative narrative of the 1917 Russian revolutions with an emphasis on the conspiracies, mutinies, and acts of treason behind the scenes of both revolutions. He shows how the revolutions were a direct result of Russia's involvement in World War I in new ways. It is a book that will generate much debate."
—Eric Lohr, Susan Carmel Lehrman Chair of Russian History and Culture, American University