I Want My MTV: The Uncensored Story of the Music Video Revolution (Paperback) 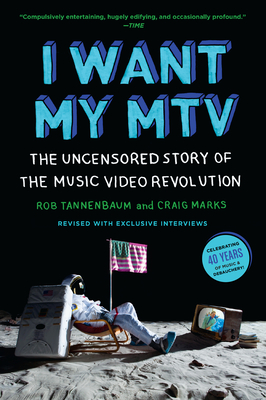 Remember When All You Wanted Was Your MTV? The perfect gift for the music fan or child of the eighties in your life.

Remember the first time you saw Michael Jackson dance with zombies in "Thriller"? Diamond Dave karate kick with Van Halen in "Jump"? Tawny Kitaen turning cartwheels on a Jaguar to Whitesnake's "Here I Go Again"? The Beastie Boys spray beer in "(You Gotta) Fight for Your Right (To Party)"? Axl Rose step off the bus in "Welcome to the Jungle"?

It was a pretty radical idea-a channel for teenagers, showing nothing but music videos. It was such a radical idea that almost no one thought it would actually succeed, much less become a force in the worlds of music, television, film, fashion, sports, and even politics. But it did work. MTV became more than anyone had ever imagined.

I Want My MTV tells the story of the first decade of MTV, the golden era when MTV's programming was all videos, all the time, and kids watched religiously to see their favorite bands, learn about new music, and have something to talk about at parties. From its start in 1981 with a small cache of videos by mostly unknown British new wave acts to the launch of the reality-television craze with The Real World in 1992, MTV grew into a tastemaker, a career maker, and a mammoth business.

Featuring interviews with nearly four hundred artists, directors, VJs, and television and music executives, I Want My MTV is a testament to the channel that changed popular culture forever.

Craig Marks was the top editor for two influential music magazines, SPIN and Blender. He is the editor in chief of Popdust.

Rob Tannenbaum has been the music editor at Blender, a columnist at GQ, and has written for The New York Times Magazine, Rolling Stone, Details, New York Magazine, Playboy, Spin, and The Washington Post.

"It reminded me of those long days watching MTV, back when it still played videos...riveting." -New York Times

"Hilarious, with behind-the-scenes dirt on hundreds of videos. I guarantee you'll have a tough time putting it down." -USA Today

"Riveting reading, and a book we expect to see on the best-seller lists." -Very Short List

"The sheer entertainment value within these pages is priceless." -Publishers Weekly

"Just as MTV hypnotized viewers, so the jump-cut structure of I WANT MY MTV swiftly compels." -Businessweek

"Rollicking. The golden age of MTV was just as wild and debauched as you would hope." -New York Post

"A rip-roaring, hilarious tribute to the cable channel that changed pop culture. A wonderfully entertaining and enlightening history, a magnificently enjoyable read." -The National

"Riotous and irreverent. Crack it open to almost any page and you're guaranteed a giggle. Every gaffe, scandal, and sexual innuendo comes in for hilarious scrutiny." -New York Daily News

"Insiders are already buzzing about the book, which does for music television what Fredric Dannen's Hit Men did for indie promotion." -HITS

"It makes you laugh, it makes you cry. I couldn't put it down. This is the best book I've read on how the music business really works." -Bob Lefsetz, The Lefsetz Letter

"The entire Grantland staff is obsessed with the book" -Grantland

"The writers certainly did their homework, chronicling the wild and crazy ride of the network in the words of its own eclectic cast of characters...there is plenty to sink your teeth into with this book." -Hollywood Reporter

"I WANT MY MTV chronicles MTV as I, and many others, would like to remember it: a lot of fun when it first came on the scene and a joy to watch every day" -TG Daily


"MTV changed America and this book will change how you think about MTV. It's a fascinating look deep inside how MTV became what it was from the mouths of those who made it. Everyone who loved or hated MTV will love this story filled with fights, drugs, sex and music." -Toure, author of Who's Afraid of Post-Blackness?


"Before Google and before Apple, MTV was the one post-60s American enterprise that really transformed the culture. And now we have this definitive, riveting, revealing, amazingly well-reported insiders' account of how an improbable group of visionaries made it up as they went along. You want I Want My MTV." -Kurt Andersen, author of Heyday and Reset, and host of public radio's "Studio 360"


"I Want My MTV is such a big, wild joyride of book, made to be read with glee and nostalgia and marvel. It's also a thoughtful and astonishingly well-researched historical document, of course, but mostly it's just a total gas. It's all in here, folks! Girls in cages! TV executives on blow! Dudes in eyeliner! Chicks with guitars! Pyrotechnics, consumerism, fame, destruction and shamelessness! Anyone who came of age during the glory days of MTV will be-page by page-steadily transported right back to your boyfriend's parent's wood-paneled den, to savor once more the life-changing lessons of decadence and magic we learned from cable TV."  -Elizabeth Gilbert, bestselling author of Eat, Pray, Love and Committed

"I Want My MTV is the definitively funny-yet loving-chronicle of music video's golden age: the hopes, the dreams, the drugs, the hair, the legacy of Tawny Kitaen. And for gossip, it's packed tighter than one of Heart's spandex bustiers." -Rob Sheffield, author of the national bestseller Love is a Mix Tape and Talking to Girls About Duran Duran

“Hilarious. One of my favorite books of the year. I guarantee you’ll have a tough time putting it down.” -USA Today

“This is my kind of book.” -Howard Stern

“Wildly entertaining. Music and culture fans of a certain age – you will want this book.” -Washington Post