Land of a Thousand Hills: My Life in Rwanda (Paperback) 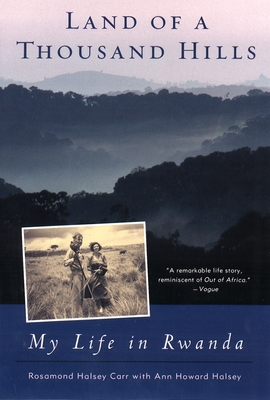 Land of a Thousand Hills: My Life in Rwanda (Paperback)


Usually Ships in 1-5 Days
In 1949, Rosamond Halsey Carr, a young fashion illustrator living in New York City, accompanied her dashing hunter-explorer husband to what was then the Belgian Congo. When the marriage fell apart, she decided to stay on in neighboring Rwanda, as the manager of a flower plantation. Land of a Thousand Hills is Carr's thrilling memoir of her life in Rwanda—a love affair with a country and a people that has spanned half a century. During those years, she has experienced everything from stalking leopards to rampaging elephants, drought, the mysterious murder of her friend Dian Fossey, and near-bankruptcy. She has chugged up the Congo River on a paddle-wheel steamboat, been serenaded by pygmies, and witnessed firsthand the collapse of colonialism. Following 1994's Hutu-Tutsi genocide, Carr turned her plantation into a shelter for the lost and orphaned children-work she continues to this day, at the age of eighty-seven.

Rosamond Halsey Carr was an American humanitarian and author, as well as the last of the foreign plantation owners in Rwanda, where she ran a children's orphanage until her death in 2006.

“Carr has lived an extraordinary life… Carr and her niece Ann Howard Halsey elegantly and objectively write of the royal Rwandan ceremonies, the weddings and tribal dances, as well as Carr's associations with European diplomats and ambassadors and the ‘high society’ of wealthy landowners. Her descriptions of the day-to-day life at the plantation allow the reader to learn about the lives of the Hutus that worked for her and the neighboring Tutsis whose cattle grazed close by.”—Michelle Kaske, Booklist

“An intriguing memoir of a European woman plantation owner in Rwanda over the past half-century, written with grace and self-assurance… She appreciates the various shades of gray that color her region's circumstances: she provides a neat, crisp summation of Hutu-Tutsi enmity and its cruel consequences over their 400-year association, and she maps Belgian colonial desires in the Congo and Rwanda and Burundi. She exudes common sense and integrity in matters of politics and business (she is invariably on the brink), then softens the story by lacing it with personal relationships (including a rocky but intense one with Dian Fossey) and life at her compound, where bougainvillea twine with the climbing roses, crested cranes rule the sky, elephants are garden pests, and an active volcano lights the night horizon. A quiet and elegant beauty of a memoir, with a dignity that is at once antique and enviable.”—Kirkus Reviews