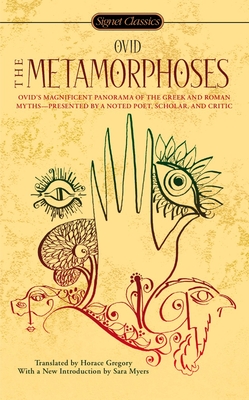 
Usually Ships in 1-5 Days
A masterpiece of Western culture, this is the first attempt to link all the Greek myths in a cohesive whole to the Roman myths of Ovid?s day. Horace Gregory, in this modern translation, turns his own poetic gifts toward a deft reconstruction of Ovid?s ancient themes.
Ovid—Publius Ovidius Naso—(43 bce–ce 17 or 18) was born into a wealthy Roman family and became the most distinguished poet of his time. He died in exile on the Black Sea, far from Rome and his literary life.

“Reading Mandelbaum’s extraordinary translation, one imagines Ovid in his darkest moods with the heart of Baudelaire . . . Mandelbaum’s translation is brilliant. It throws off the stiff and mild homogeneity of former translations and exposes the vivid colors of mockery, laughter, and poison woven so beautifully by the master.” —Booklist

“Mandelbaum’s Ovid, like his Dante, is unlikely to be equalled for years to come.” —Bloomsbury Review

“The Metamorphoses is conceived on the grandest possible scale . . . The number and variety of the metamorphoses are stunning: gods and goddesses, heroes and nymphs, mortal men and women are changed into wolves and bears, frogs and pigs, bulls and cows, deer and birds, trees and flowers, rocks and rivers, spiders and snakes, mountains and stars, while ships become sea nymphs, ants and stones and statues become people, men become women and vice versa . . . An elegantly entertaining and enthralling narrative.”
—from the Introduction by  J. C. McKeown