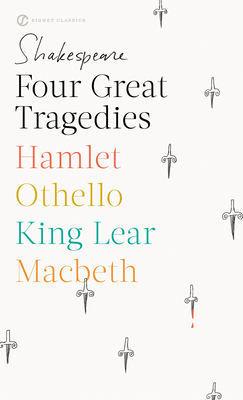 What is tragedy? The Elizabethans defined it as a “lofty” play showing “personages of great state” caught up in a “lamentable” action that “beginneth prosperously and endeth unfortunately.” Whether judged by this or any other standard, the plays selected for this collection are considered to be the four central works of Shakespearean tragedy and must be included in any list of the world's finest tragic literature.

This collection in the Signet Classics Shakespeare series includes:

• An overview of William Shakespeare’s life, world, and theater
• A special introduction by the series’ general editor, Sylvan Barnet
• Reliable texts by noted Shakespeare scholars
• Text, notes, and commentaries printed in the clearest, most readable format
• Recommended readings
William Shakespeare (1564–1616) was a poet, playwright, and actor who is widely regarded as one of the most influential writers in the history of the English language. Often referred to as the Bard of Avon, Shakespeare's vast body of work includes comedic, tragic, and historical plays; poems; and 154 sonnets. His dramatic works have been translated into every major language and are performed more often than those of any other playwright.