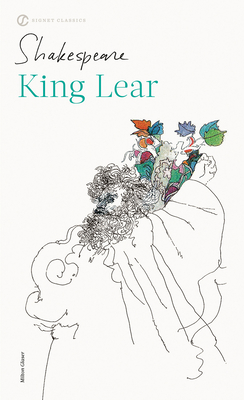 
Usually Ships in 1-5 Days
The Signet Classics edition of one of William Shakespeare’s greatest tragedies.

Full of cruelty and betrayal, King Lear is the timeless and tragic story of a kingdom held in the thrall of an aging ruler’s descent into madness. Desperate for praise, he banishes those who would guide him with honesty and surrounds himself with sycophants—an action that leads to his ultimate downfall....

• An overview of Shakespeare's life, world, and theater
• A special introduction to the play by the editor, Russell Fraser
• Selections from Raphael Holinshed's Chronicles of England, Scotland, and Ireland, Sir Philip Sidney's Arcadia, and The True Chronicle History of King Lear, the sources from which Shakespeare derived King Lear
• Dramatic criticism from Samuel Johnson, A. C. Bradley, John Russell Brown, and others
• A comprehensive stage and screen history of notable actors, directors, and productions
• Text, notes, and commentaries printed in the clearest, most readable text
• And more...
William Shakespeare (1564–1616) was a poet, playwright, and actor who is widely regarded as one of the most influential writers in the history of the English language. Often referred to as the Bard of Avon, Shakespeare's vast body of work includes comedic, tragic, and historical plays; poems; and 154 sonnets. His dramatic works have been translated into every major language and are performed more often than those of any other playwright.