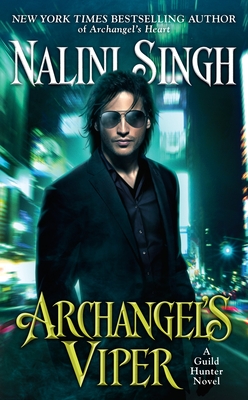 This is book number 10 in the A Guild Hunter Novel series.

Once a broken girl known as Sorrow, Holly Chang now prowls the shadowy gray underground of the city for the angels. But it’s not her winged allies who make her a wanted woman—it’s the unknown power coursing through her veins. Brutalized by an insane archangel, she was left with the bloodlust of a vampire, the ability to mesmerize her prey, and a poisonous bite.

Now, someone has put a bounty on her head…

Venom is one of the Seven, Archangel Raphael’s private guard, and he’s as infuriating as he is seductive. A centuries-old vampire, his fangs dispense a poison deadlier than Holly’s. But even if Venom can protect Holly from those hunting her, he might not be able to save himself—because the strange, violent power inside Holly is awakening…

No one is safe.
New York Times bestselling author Nalini Singh is passionate about writing. Though she’s traveled as far afield as the deserts of China, the temples of Japan, and the frozen landscapes of Antarctica, it is the journey of the imagination that fascinates her the most. She’s beyond delighted to be able to follow her dream as a writer.

She is the author of the Guild Hunter series which includes most recently, Archangel’s Heart. She is also the author of the Psy-Changeling novels including Silver Silence, Allegiance of Honor, Shards of Hope, and Shield of Winter.

“Simply. Magnificent…Guild Hunter is an epic saga, ever twisting, ever twining all the while leading you on one of the most unique literary journeys in the genre.”—Smexy Books

“Singh has created a masterful symphony of angelic war and immortal love in Archangel’s Heart.”—Fresh Fiction

“Singh's Guild Hunter novels are known for their darkly intense worldbuilding and for their exquisite romanticism…This eighth novel highlights the author’s ability to weave threads of devastation and hopefulness together; it is emotionally jarring and at times grim yet ultimately fulfilling, resonating with the conviction that love is the strongest force in the universe. Singh explores power, love, and redemption with her typical consummate skill.”—Kirkus Reviews

“This latest entry continues to set the bar high with romance, intrigue, and stellar worldbuilding.”—Library Journal

“Of course, I loved the same wonderful lighthearted periods along with the deep suspense and even danger that I have come to love with the Guild Hunter books…Archangel’s Heart has leaped to the top of my favorites by this author, and I love all of her books for different reasons.”—Joyfully Reviewed