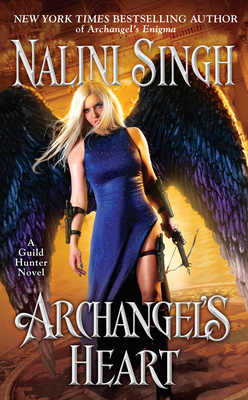 This is book number 9 in the A Guild Hunter Novel series.

New York Times bestselling author Nalini Singh takes us into a dangerous and exhilarating world where a deadly, beautiful archangel and his once-mortal consort are caught in a fury of twisted darkness…

“Raphael and Elena are the heart of this series…they are what keep me coming back for more.”—Fiction Vixen

One of the most vicious archangels in the world has disappeared. No one knows if Lijuan is dead or has chosen to Sleep the long sleep of an immortal. But with her lands falling into chaos under a rising tide of vampiric bloodlust, a mysterious and ancient order of angels known as the Luminata calls the entire Cadre together to discuss the fate of her territory.

Accompanying her archangelic lover Raphael to the Luminata compound, guild hunter-turned-angel Elena senses that all is not as it seems. Secrets echo from within the stone walls of the compound, and the deeper Elena goes, the uglier the darkness. But neither Raphael nor Elena is ready for the brutal truths hidden within—truths that will change everything Elena thinks she knows about who she is…

Nothing will ever be the same again.
New York Times bestselling author Nalini Singh is passionate about writing. Though she’s traveled as far afield as the deserts of China, the temples of Japan, and the frozen landscapes of Antarctica, it is the journey of the imagination that fascinates her the most. She’s beyond delighted to be able to follow her dream as a writer.

She is the author of the Guild Hunter series which includes most recently, Archangel’s Enigma. She is also the author of the Psy-Changeling novels including Shield of Winter, Heart of Obsidian, Shards of Hope, and Allegiance of Honor.

“This eighth novel highlights the author's ability to weave threads of devastation and hopefulness together; it is emotionally jarring and at times grim yet ultimately fulfilling, resonating with the conviction that love is the strongest force in the universe. Singh explores power, love, and redemption with her typical consummate skill.”—Kirkus Reviews (starred review)

“Eight books in and the Guild Hunter Series continues to build on that early momentum and evolve into the one of the most dynamic and compelling series in its genre. Singh’s balance of romanticism and action and adventure is unparalleled. The battle scenes are epic, the sensuality is potent, and the story arcs twine and bend to blow your mind.”—Smexy Books

“Singh is a brilliant writer, and her words about the world of angels and vampires sing from the pages...Archangel’s Engima is another hands-down winner by virtuoso Nalini Singh, proving her worthy of her reigning queen of PNR status. Brava, Ms. Singh!”—Fresh Fiction

“It’s happy dance time! The incomparable Singh finally reveals the origins of the fascinating and feral Naasir! Naasir’s presence as an intriguing secondary character has quickly made him a fan favorite, and his story is everything we hoped for. As always with a Singh novel, not only is there a compelling relationship story mixed with high-stakes action, but it also includes critical advancement of the overarching series plot. Singh is one of those rare storytellers who literally never disappoints!”—RT Book Reviews (4 1/2 stars, Top Pick)