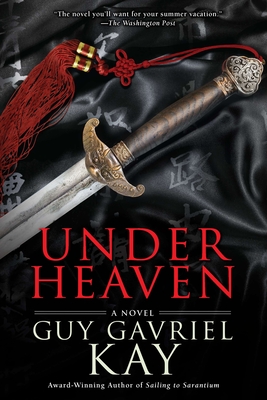 It begins simply. Shen Tai, son of an illustrious general serving the Emperor of Kitai, has spent two years honoring the memory of his late father by burying the bones of the dead from both armies at the site of one of his father's last great battles. In recognition of his labors and his filial piety, an unlikely source has sent him a dangerous gift: 250 Sardian horses.

You give a man one of the famed Sardian horses to reward him greatly. You give him four or five to exalt him above his fellows, propel him towards rank, and earn him jealousy, possibly mortal jealousy. Two hundred and fifty is an unthinkable gift, a gift to overwhelm an emperor.

Wisely, the gift comes with the stipulation that Tai must claim the horses in person. Otherwise he would probably be dead already...
Guy Gavriel Kay is the international bestselling author of numerous fantasy novels including The Fionavar Tapestry trilogy, Tigana, The Last Light of the Sun, Under Heaven, River of Stars, and Children of Earth and Sky. He has been awarded the International Goliardos Prize for his work in the literature of the fantastic, and won the World Fantasy Award for Ysabel in 2008. In 2014 he was named to the Order of Canada, the country’s highest civilian honor. His works have been translated into more than twenty-five languages.
Praise for Under Heaven

“Guy Gavriel Kay’s Under Heaven isn’t quite historical fiction, nor is it quite fantasy. It’s set in a slightly reimagined Tang dynasty China, sometimes seems reminiscent of films like “Crouching Tiger, Hidden Dragon,” and depicts the unimaginable consequences of a single generous gift. Most important of all, it is the novel you’ll want for your summer vacation.” —The Washington Post

“Guy Gavriel Kay is peerless in plucking elements from history and using them to weave a wholly fantastical tale that feels like a translation of some freshly unearthed scroll from a time we have yet to discover.”—The Miami Herald

“A magnificent epic, flawlessly crafted, that draws the reader in like a whirlwind and doesn’t let go.”—The Huffington Post

“Completely transporting...combines the best of historical and fantasy novels to create a great read where you don't know what could happen next.”—Laura Miller, Salon Book Reviewer

“Guy Gavriel Kay, hunting in the twilight zone between fact and dream, has written a shimmering novel, a fantasia on T’ang China, the epitome of Chinese civilization...a beautiful, compulsive read.”—Locus

More Praise for the Novels of Guy Gavriel Kay

“History and fantasy rarely come together as gracefully or readably as they do in the novels of Guy Gavriel Kay.”—The Washington Post Book World

“Kay shows why he’s the heir to Tolkien’s tradition.”—Booklist

“Kay is a genius. I've read him all my life and am always inspired by his work.”—#1 New York Times bestselling author Brandon Sanderson

“A storyteller on the grandest scale.”—Time Magazine, Canada