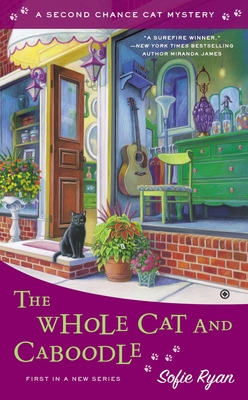 This is book number 1 in the Second Chance Cat Mystery series.

Sarah Grayson is the happy proprietor of Second Chance, a charming shop in the oceanfront town of North Harbor, Maine. At the shop, she sells used items that she has lovingly refurbished and repurposed. But her favorite pet project so far has been adopting a stray cat she names Elvis.

Elvis has seen nine lives—and then some. The big black cat with a scar across his nose turned up at a local bar when the band was playing the King of Rock and Roll’s music and hopped in Sarah’s truck. Since then, he’s been her constant companion and the furry favorite of everyone who comes into the store.

“A series sure to appeal to anyone who loves a combination of felonies and felines.”—Richmond Times-Dispatch

“Cleverly planned and flawlessly executed...full of humor, cat antics, intrigue and suspense...the best of both worlds for those who love cats and cozy mysteries.”—Open Book Society

“Enjoyable from beginning to end; readers will look forward to more.”—RT Book Reviews

“If you enjoy a cozy mystery featuring a lovable protagonist with a bevy of staunch friends, a shop you’d love to explore, plenty of suspects, and a super smart cat, you’ll love The Whole Cat and Caboodle.”—MyShelf.com

“Enjoyable...Remember, everyone has a secret, even the cat.”—Kings River Life Magazine