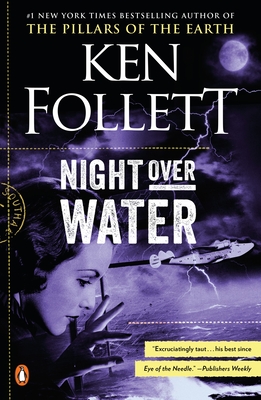 
Email or call for price
#1 New York Times bestselling author Ken Follett takes to the skies in this classic novel of international suspense. Set in the early days of World War II, Night over Water captures the daring and desperation of ordinary people caught in extraordinary circumstances—in prose as compelling as history itself. . . .

September 1939. England is at war with Nazi Germany. In Southampton,  the world's most luxurious airliner—the legendary Pan Am Clipper—takes off for its final flight to neutral America. Aboard are the cream of society and the dregs of humanity, all fleeing the war for reasons of their own . . . shadowed by a danger they do not know exists . . . and heading straight into a storm of violence, intrigue, and betrayal. . . .

Ken Follett is one of the world’s best-loved authors, selling more than 160 million copies of his thirty books. Follett’s first bestseller was Eye of the Needle, a spy story set in the Second World War.

In 1989 The Pillars of the Earth was published, and has since become the author’s most successful novel. It reached number one on bestseller lists around the world and was an Oprah’s Book Club pick.

Its sequels, World Without End and A Column of Fire, proved equally popular, and the Kingsbridge series has sold 38 million copies worldwide.

Follett lives in Hertfordshire, England, with his wife Barbara. Between them they have five children, six grandchildren, and three Labradors.


Praise for Night over Water

"Excruciatingly taut . . . his best since Eye of the Needle." —Publishers Weekly

"Follett is a master." —The Washington Post Book World

"Follett really knows how to tell a story." —The Atlanta Journal-Constitution