God Is Not Great: How Religion Poisons Everything (Paperback) 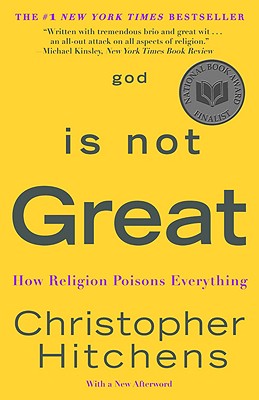 God Is Not Great: How Religion Poisons Everything (Paperback)


Usually Ships in 1-5 Days
Whether you're a lifelong believer, a devout atheist, or someone who remains uncertain about the role of religion in our lives, this insightful manifesto will engage you with its provocative ideas.

With a close and studied reading of the major religious texts, Christopher Hitchens documents the ways in which religion is a man-made wish, a cause of dangerous sexual repression, and a distortion of our origins in the cosmos. With eloquent clarity, Hitchens frames the argument for a more secular life based on science and reason, in which hell is replaced by the Hubble Telescope's awesome view of the universe, and Moses and the burning bush give way to the beauty and symmetry of the double helix.

In the tradition of Bertrand Russell's Why I Am Not a Christian and Sam Harris's The End of Faith, Christopher Hitchens makes the ultimate case against religion.
Christopher Hitchens was a contributing editor to Vanity Fair,Slate, and the Atlantic, and the author of numerous books, including works on Thomas Jefferson, Thomas Paine, and George Orwell. He also wrote the international bestsellers god Is Not Great: How Religion Poisons Everything, Hitch-22: A Memoir, and Arguably. He died in December 2011.
"[An] impressive and enjoyable attack on everything so many people hold dear... Hitchens has outfoxed the Hitchens watchers by writing a serious and deeply felt book, totally consistent with his beliefs of a lifetime. And God should be flattered: unlike most of those clamoring for his attention, Hitchens treats him like an adult."—New York Times Book Review

"[Hitchens] has somehow turned out an atheist book that, whatever one's stance on divine providence, is thoroughly enjoyable...in its profane interrogation of the sacred, [it] achieves a kind of joyous impudence...His narrative leans briskly and unrelentingly forward, subverting an unsettling all kinds of complacencies, religious and otherwise."—Joseph Rago, Wall Street Journal