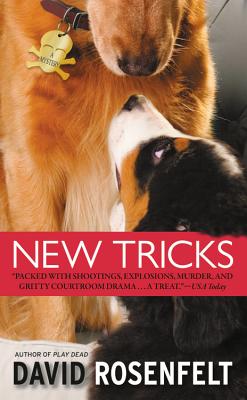 This is book number 7 in the The Andy Carpenter Series series.

In this "taut thriller full of whiplash plot twists and wisecracking dialogue," a lawyer will do whatever it takes to make sure an adorable Bernese puppy -- whose owner was brutally murdered -- doesn't fall into the wrong hands (Entertainment Weekly).
Few can rival Andy's affection for dogs. However, the playful new friend he just inherited is valued by several people, many of whom are willing to resort to violence to get what they want. It will take more than Andy's usual courtroom theatrics to save this dog, including a little help from his beloved golden retriever, Tara.
Andy soon discovers that anyone around him is in danger, including his long-time girlfriend Laurie, and he will have to muster all of his wits to save those he holds most dear.
David Rosenfelt is the former marketing president for Tri-Star Pictures and lives in Southern California.
On PLAY DEAD: "Riveting...alive with reliable Rosenfelt wit and heart."—Publishers Weekly (starred review)

"A cracking good yarn...Andy's offbeat, outspoken personality shines on every page, and the balance of humor and mystery is dead-on."—Booklist (starred review)