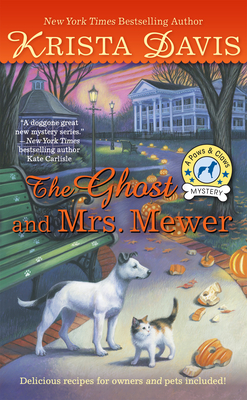 This is book number 2 in the A Paws & Claws Mystery series.

Wagtail, Virginia, the top pet-friendly getaway in the United States, is gearing up for a howling good Halloween—until a spooky murder shakes the town to its core..

Holly Miller doesn’t believe in spirits, but the Sugar Maple Inn is filled with guests who do. The TV series in development, Apparition Apprehenders, has descended on Wagtail’s annual Halloween festivities to investigate supernatural local legends, and Holly has her hands full showing the ghost hunters a scary-fun time.

But the frights turn real when Holly’s Jack Russell, Trixie, and kitten, Twinkletoes, find a young woman drowned in the Wagtail Springs Hotel’s bathhouse—the spot of the town’s most infamous haunting. The crime scene is eerily similar to the creepy legend, convincing Holly that the death wasn’t just accidental. Now she’ll have to race to catch a flesh-and-blood killer—before someone else in town gives up the ghost...

Delicious recipes for owners and pets included!
Krista Davis is the New York Times bestselling author of the Paws & Claws Mysteries and the Domestic Diva Mysteries. Several of her books have been nominated for the Agatha Award. She lives in the Blue Ridge Mountains of Virginia with a brood of cats and dogs, including a snoopy Jack Russell terrier and a nosy calico cat. Her friends and family complain about being guinea pigs for her recipes, but she notices that they keep coming back for more.

“Davis has created a town that any pet would love—as much as their owners do. And they won’t let a little thing like murder spoil their enjoyment.”—Sheila Connolly, New York Times bestselling author of the County Cork, Museum, and Orchard Mysteries

“Murder, mystery, a bit of romance and seriously PETS!! Who could ask for anything more?”—Open Book Society