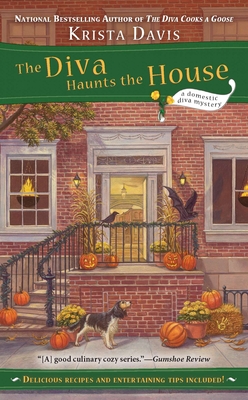 This is book number 5 in the A Domestic Diva Mystery series.

In the fifth mystery in the New York Times bestselling Domestic Diva series, Sophie Winston is getting into the Halloween spirit, but someone else is intent on mischief...

Sophie's decorations for a community haunted house are so good, it’s scary. Not to be outdone, rival domestic diva Natasha is throwing a spooktacular Halloween party at her house. But when Sophie arrives, she discovers one of Natasha’s guests dead in a hair-raising Halloween display, and a pale, fanged partygoer fleeing the scene.

The cause of death is not immediately apparent, but the victim does have two puncture wounds on his neck. While Sophie’s boyfriend, homicide detective Wolf, investigates, rumors start flying faster than witches on broomsticks. Could the killer be a real vampire—the same one rumored to have lived in Sophie’s haunted house back when it was a boardinghouse? Good thing a domestic diva never runs out of garlic...