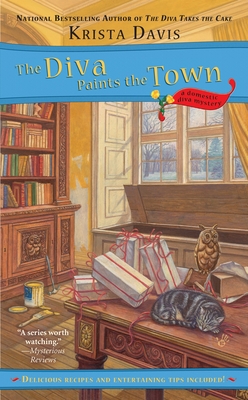 This is book number 3 in the A Domestic Diva Mystery series.

In the third Domestic Diva mystery, a decorating project leaves Sophie Winston with a deadly case that has to be seen to be believed...

Sophie Winston’s reclusive neighbor, Professor Mordecai Artemus, has died and left his sprawling home to his Pomeranian. Sophie feels a tad guilty for not having befriended Mordecai, but at least she’s not as heartless as her nemesis Natasha, who’s descended on the house with a crew of interior designers and contractors to renovate the place for the statewide Spring Home and Garden Tour.

Even Sophie’s been assigned a room to decorate: the family room, where the Professor did most of his living—and where he died. In the midst of cleaning, spackling and painting, Sophie uncovers a second body—but when next she looks it’s disappeared!  Now Sophie has to hammer away to discover the truth about the missing man, before her best friend gets nailed for murder...