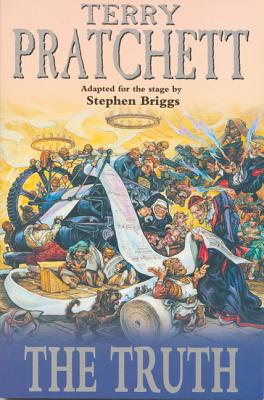 A new stage adaptation of one of Pratchett's best-selling novels

There's been a murder. Allegedly. William de Worde is the Discworld's first investigative journalist. He didn't mean to be - it was just an accident. But, as William fills his pages with reports of local club meetings and pictures of humorously shaped vegetables, dark forces high up in Ankh-Morpork's society are plotting to overthrow te city's ruler, Lord Vetinari.One of the funniest authors alive The Independent
Terry Pratchett is one of the most popular authors writing today. He lives behind a keyboard in Wilt shire and says he 'doesn't want to get a life, because it feels as though he's trying to lead three already'. He was appointed OBE in 1998. He is the author of the phenomenally successful discworld se ries and his trilogy for young readers, The Bromeliad, is scheduled to be adapted into a spectacular animated movie. His latest book, The Truth, is the 25th novel in the Discworld series.

"One of the funniest authors alive" The Independent