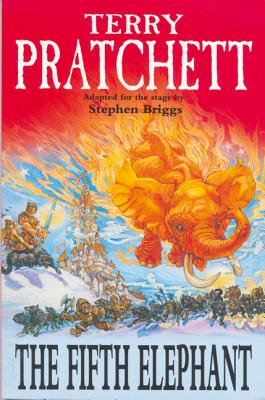 A new stage adaptation of one of Pratchett's best-selling novels

Commander Vimes is sent to wild, wintry and Transylvania-like Uberwald to establish trade links with the King of the Dwarfs but he ends up trying to stop and inter-species war. On his side though, is a talking dog, a reformed vampyre and a self-made man. You can tell he's self-made because the stitches still show. Vimes may have arrived as Ankh-Morpork's ambassador but he soon finds it's not all golden chocolate balls. Now he's an escaped prisoner - out in the icy woods, wearing only the gloomy trousers of Uncle Vanya and being chased by a pack of fascist werewolves who don't play by the rules.One of the funniest authors alive The Independent
Terry Pratchett is one of the most popular authors writing today. He lives behind a keyboard in Wilt shire and says he 'doesn't want to get a life, because it feels as though he's trying to lead three already'. He was appointed OBE in 1998. He is the author of the phenomenally successful Discworld se ries and his trilogy for young readers, The Bromeliad, is scheduled to be adapted into a spectacular animated movie. His latest book, The Truth, is the 25th novel in the Discworld series.

"One of the funniest authors alive"-The Independent