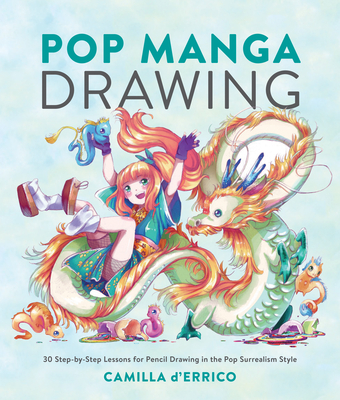 With wildly popular appearances at Comic Cons and her paintings displayed in art galleries around the world, Camilla d'Errico has established herself as a go-to resource for manga-influenced art. Following in the footsteps of her past art instruction books Pop Manga and Pop Painting, Pop Manga Drawing provides the most direct and accessible lessons yet for rendering characters in her signature Pop Surrealist style. Written in the fun and encouraging voice that fans have come to expect, Pop Manga Drawing takes you step-by-step through lessons on drawing with graphite and mechanical pencils, along with insights on enhancing pieces with other mediums (including acrylics, markers, and colored pencils). It also provides tips and expert advice on drawing specific elements, including hair, eyes, and animals, that can take your manga art to the next level. Pop Manga Drawing grants one-of-a-kind access to the basic building blocks of artistic expression, giving you the tools you need to create your own pop manga masterpieces.
CAMILLA d'ERRICO has gained wide acclaim for her illustrative work, including nominations for the Joe Shuster Award and the Will Eisner Award. She is the co-author of Pop Manga and the author of Pop Painting, Pop Manga Coloring Book, and Pop Manga Mermaids and Other Sea Creatures. She has worked with Dark Horse Comics, Image Comics, Hasbro, Disney, Sanrio, and Neil Gaiman, and created her own cult-sensation properties Tanpopo and Helmetgirls. She is also well known for her melting rainbow, big-eyed girl oil paintings, which have made her a hit in the international Pop Surrealism movement.