The Hobbit (The Lord of the Rings) (Paperback) 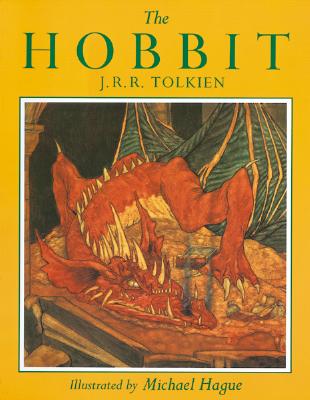 The Hobbit (The Lord of the Rings) (Paperback)

"In a hole in the ground, there lived a hobbit." So begins one of the most beloved and delightful tales in the English language. Set in the imaginary world of Middle-earth, at once a classic myth and a modern fairy tale, The Hobbit is one of literature's most enduring and well-loved novels. This edition of J.R.R. Tolkien's classic is illustrated with 48 paintings by noted artist Michael Hague.

Bilbo Baggins is a hobbit who enjoys a comfortable, unambitious life, rarely traveling any farther than his pantry or cellar. But his contentment is disturbed when the wizard Gandalf and a company of dwarves arrive on his doorstep one day to whisk him away on an adventure. They have launched a plot to raid the treasure hoard guarded by Smaug the Magnificent, a large and very dangerous dragon.

Bilbo reluctantly joins their quest, unaware that on his journey to the Lonely Mountain he will encounter both a magic ring and a frightening creature known as Gollum.

Written for J.R.R. Tolkien's own children, The Hobbit has sold many millions of copies worldwide and established itself as a modern classic.

"Warm and dusky colors predominate in the handsome full-color scenes--forty-eight in all, including five lavish spreads--that embellish this edition, which is also beautifully designed." Booklist, ALA —