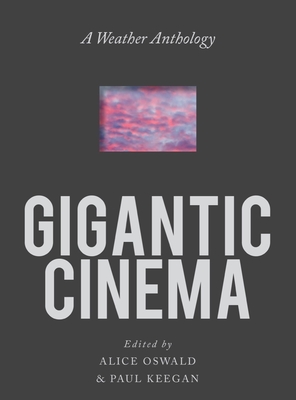 A luminous, "deliciously playful" (Rishi Dastidar, Guardian) anthology of poems and prose inspired by the weather.

In three hundred varied entries, Gigantic Cinema narrates the weather of a single capricious day, from dawn through rain, volcanic ash, nuclear dust, snow, light, fog, noon, eclipse, hurricane, flood, dusk, night, and back to dawn again. It includes reactions both formal and fleeting—weather rhymes, journals and jottings, diaries and letters—to the imaginary and actual drama unfolding above our heads.

Ranging from Homer’s winds and Ovid’s flood to Frank O’Hara’s sun, Pliny’s reportage on the eruption of Vesuvius to Elizabeth Bishop’s “Song for a Rainy Season,” Gigantic Cinema offers an expansive collection of writing inspired by the commotion of the elements. Rather than drawing attention to authors and titles, entries appear as a medley of voices; as editors Alice Oswald and Paul Keegan write in their stunning introduction, the excerpts ask to be read “with no hat, no coat, no preconceptions, encountering each voice abruptly, as an exclamation brought on by the weather.” Assembling a chorus of responses (ancient and modern, East and West) to air’s manifold appearances, Gigantic Cinema offers a new perspective on the oldest conversation of all.

Paul Keegan is the editor of The Penguin Book of English Verse. He lives in London.

Alice Oswald is the author of eight books of poetry, including Memorial and Falling Awake, winner of the Costa Poetry Award and Griffin Poetry Prize. Elected as the University of Oxford Professor of Poetry in 2019, she lives in Bristol, United Kingdom.
A dazzling anthology... This astonishingly accomplished and varied assembly of poems and literary gems will delight readers year-round, and in any weather.
— Publishers Weekly (starred review)

A deliciously playful reminder that the greatest show on the planet is what happens in the skies and all around us.
— Rishi Dastidar - Guardian

The weather comes at you, page after page, with an almighty and unstoppable roar of terrifying magnificence.
— Michael Glover - Tablet

A capacious selection of writings about the whether... The 300 entries are vibrant, evocative, and sometimes surprising... A delightful collection.
— Kirkus Reviews

A brilliant anthology of disturbances and interruptions, in which finite mortals struggle to express the mysteries of invisible forces that tangle the sense.
— Joanna Kavenna - Literary Review