Rise of the Machines: A Cybernetic History (Paperback) 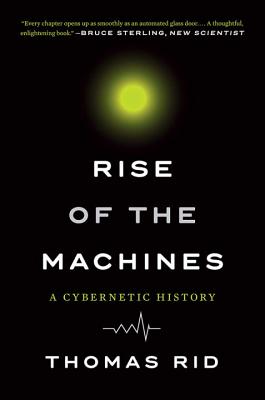 Rise of the Machines: A Cybernetic History (Paperback)

As lives offline and online merge even more, it is easy to forget how we got here. Rise of the Machines reclaims the spectacular story of cybernetics, one of the twentieth century’s pivotal ideas.

Springing from the mind of mathematician Norbert Wiener amid the devastation of World War II, the cybernetic vision underpinned a host of seductive myths about the future of machines. Cybernetics triggered blissful cults and military gizmos, the Whole Earth Catalog and the air force’s foray into virtual space, as well as crypto-anarchists fighting for internet freedom.

In Rise of the Machines, Thomas Rid draws on unpublished sources—including interviews with hippies, anarchists, sleuths, and spies—to offer an unparalleled perspective into our anxious embrace of technology.

Thomas Rid is a professor in the Department of War Studies at King’s College London and the author of Cyber War Will Not Take Place and War and Media Operations. He lives in London.

Rid, a professor in security studies at King’s College London, is a fine chronicler of the debate, deftly recounting the hope, hype, and fears that have accompanied our thinking on automation…Fascinating…Dazzling.
— Financial Times

Cybernetics came about in the late 1940s as a way to understand the technology of feedback systems as a form of near-life. Thomas Rid's book is a solid, highly readable history on the subject.
— Mark Frauenfelder - Boing Boing

A common theme connects war machines, computer networks, social media, ubiquitous surveillance, and virtual reality. For fifty years or more the same people and the same ideas weave through these innovations united by the term ‘cyber,’ as in cyberspace and cybernetics. Read this amazing history and you’ll go: ‘Aha!’
— Kevin Kelly, founder of Wired magazine, author of What Technology Wants and The Inevitable

Rise of The Machines isn't just an insightful history of cybernetics but also a fascinating journey with the twentieth-century thinkers—from tech giants and eccentric mathematicians to science fiction writers and counterculture gurus—who have shaped how we understand machines and ourselves.

— P. W. Singer, author of Cybersecurity and Cyberwar: What Everyone Needs to Know and Ghost Fleet: A Novel of the Next World War

Sometimes the most important things are hiding in plain sight. At least that’s what I concluded from Rise of the Machines, Thomas Rid’s masterful blending of the art of a storyteller, the discipline of an historian, and the sensitivity of a philosopher. Machines unmasks how really disruptive this “cyber thing” has been and will continue to be to nearly all aspects of human experience. It’s more than food for thought. It’s a banquet.

— General Michael Hayden, former director of the NSA and the CIA

Rise of the Machines is a fascinating history of cybernetics, and of the visionaries like Norbert Wiener who first imagined the potential—and peril—of machines that would begin to replicate the capabilities of the human mind.

— Martin Ford, author of Rise of the Robots

Everyone I know should read this book. It will be a classic.
— Robert Lee, former U.S. Air Force Cyber Warfare Operations officer and SANS instructor