Searching for Sappho: The Lost Songs and World of the First Woman Poet (Paperback) 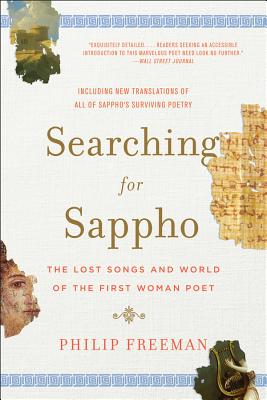 Searching for Sappho: The Lost Songs and World of the First Woman Poet (Paperback)

An exploration of the fascinating poetry, life, and world of Sappho, including a complete translation of all her poems.

For more than twenty-five centuries, all that the world knew of the poems of Sappho—the first woman writer in literary history—were a few brief quotations preserved by ancient male authors. Yet those meager remains showed such power and genius that they captured the imagination of readers through the ages. But within the last century, dozens of new pieces of her poetry have been found written on crumbling papyrus or carved on broken pottery buried in the sands of Egypt. As recently as 2014, yet another discovery of a missing poem created a media stir around the world.

The poems of Sappho reveal a remarkable woman who lived on the Greek island of Lesbos during the vibrant age of the birth of western science, art, and philosophy. Sappho was the daughter of an aristocratic family, a wife, a devoted mother, a lover of women, and one of the greatest writers of her own or any age. Nonetheless, although most people have heard of Sappho, the story of her lost poems and the lives of the ancient women they celebrate has never been told for a general audience.

Searching for Sappho is the exciting tale of the rediscovery of Sappho’s poetry and of the woman and world they reveal.

The author of more than a dozen books on the ancient world, Philip Freeman is a professor and chair of the classics department at Luther College. He earned his PhD from Harvard University. He lives in Decorah, Iowa.

Philip Freeman brings sexy back in Searching for Sappho.

Philip Freeman’s Searching for Sappho provides students and general readers with readable translations and interpretations of all the surviving poems and fragments, including those most recently discovered. As it reconstructs Sappho’s life, it offers a lively picture of ancient Greek women’s daily experience within their families and communities. Finally, it conveys a sense of the excitement generated in the last two decades by the unexpected recovery of several new Sappho texts. Soundly researched yet wholly accessible, this volume is a complete and rewarding introduction to one of the world’s greatest poets.

— Marilyn B. Skinner, professor of classics emerita, University of Arizona