A History of Opera (Paperback) 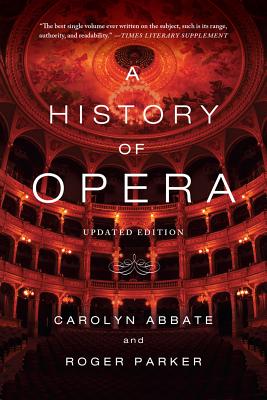 A History of Opera (Paperback)

“The best single volume ever written on the subject, such is its range, authority, and readability.”—Times Literary Supplement

Why has opera transfixed and fascinated audiences for centuries? Carolyn Abbate and Roger Parker answer this question in their “effervescent, witty” (Die Welt, Germany) retelling of the history of opera, examining its development, the musical and dramatic means by which it communicates, and its role in society. Now with an expanded examination of opera as an institution in the twenty-first century, this “lucid and sweeping” (Boston Globe) narrative explores the tensions that have sustained opera over four hundred years: between words and music, character and singer, inattention and absorption. Abbate and Parker argue that, though the genre’s most popular and enduring works were almost all written in a distant European past, opera continues to change the viewer— physically, emotionally, intellectually—with its enduring power.

Carolyn Abbate, professor of music at Harvard University, is the author of Unsung Voices and In Search of Opera. She writes on film, philosophy, and opera and has also worked as a translator and dramaturge. She lives in Princeton, New Jersey.

Roger Parker, professor of music at King’s College London, writes on opera and music in London. He is the author of Leonora’s Last Act and Remaking the Song and was a founding coeditor of the Cambridge Opera Journal. He lives in Hampshire.
Fantastically clear-sighted and down-to-earth . . . focuses on what opera is and was rather than what it should be or would like to have been. . . . Their virtuosic spring-clean of opera’s past reveals an art form quite different to the one that we come across today.
— The Telegraph (UK)

Reason to applaud . . . vast scholarly authority is put to the service of a narrative both lucid and sweeping.
— Jeremy Eichler - Boston Globe

Unfailingly intelligent . . . their coverage of every period in opera’s history is scrupulous and provocative.
— Kirkus Reviews

Will surely become essential reading for anyone seeking an engaging and highly informed chronicle of the great composers and their works.
— Daniel Snowman - Opera

A highly idiosyncratic and personal history of opera. [It] has a brio, insouciance, and even irreverence that are very much their own.
— G.W. Bowersock - The New Republic

Fresh . . . brave, challenging and, above all, useful.
— Literary Review