The Death of King Arthur: A New Verse Translation (Paperback) 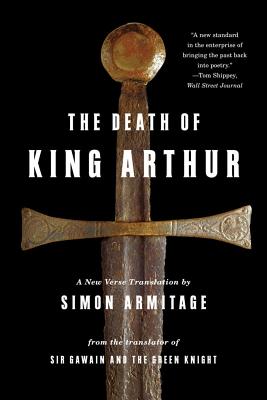 The Death of King Arthur: A New Verse Translation (Paperback)

By Simon Armitage (Translated by)

“A new standard in the enterprise of bringing the past back into poetry.”—Tom Shippey, Wall Street Journal

First appearing around 1400, The Death of King Arthur is one of the most widely beloved and spectacularly alliterative poems penned in Middle English. While it is more than six centuries old, this magisterial new translation has finally given American readers the ability to experience the splendor and poignancy of the original. Echoing the lyrical passion that so distinguished Seamus Heaney’s Beowulf, Simon Armitage has produced a virtuosic translation of a timeless masterpiece, one that follows Arthur’s bloody conquests across Europe, all the way to his spectacular and even bloodier downfall. This unparalleled presentation of the greatest Arthurian tale promises to become the definitive edition for generations to come.

Simon Armitage is Professor of Poetry at the University of Leeds and from 2015 to 2019 served as the Oxford Professor of Poetry. He has published ten collections of poetry and is the author of four stage plays, over a dozen television films, a libretto, two novels, and three memoirs. His poetry has won numerous awards, including a Gregory Award, a Forward Prize, a Lannan Literary Award, and the Queen’s Gold Medal for Poetry. In 2019 he was appointed Poet Laureate of the United Kingdom.

Armitage has triumphed. . . . The verse requires attention; but, once you are attuned to the alliterative structure, it’s as swift as the swish of a sword.
— David Blackburn - Spectator