The Hebrew Bible: A Translation with Commentary (Hardcover) 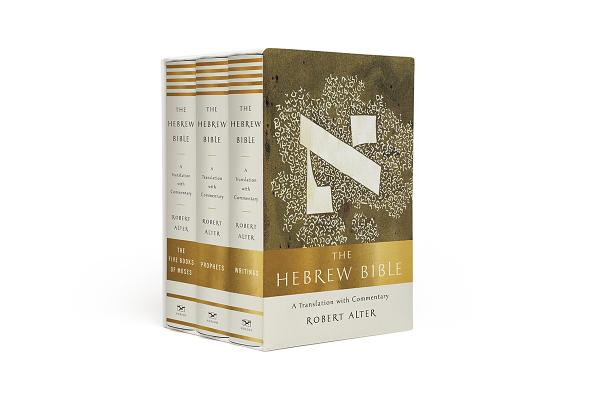 The Hebrew Bible: A Translation with Commentary (Hardcover)

A landmark event: the complete Hebrew Bible in the award-winning translation that delivers the stunning literary power of the original.

A masterpiece of deep learning and fine sensibility, Robert Alter’s translation of the Hebrew Bible, now complete, reanimates one of the formative works of our culture. Capturing its brilliantly compact poetry and finely wrought, purposeful prose, Alter renews the Old Testament as a source of literary power and spiritual inspiration. From the family frictions of Genesis and King David’s flawed humanity to the serene wisdom of Psalms and Job’s incendiary questioning of God’s ways, these magnificent works of world literature resonate with a startling immediacy. Featuring Alter’s generous commentary, which quietly alerts readers to the literary and historical dimensions of the text, this is the definitive edition of the Hebrew Bible.

Robert Alter's translation of the Hebrew Bible, the magnificent capstone to a lifetime of distinguished scholarly work, has won the PEN Center Literary Award for Translation. His immense achievements in scholarship ranging from the eighteenth-century European novel to contemporary Hebrew and American literature earned Alter the Robert Kirsch Award for Lifetime Achievement from the Los Angeles Times. A member of the American Academy of Arts and Sciences and the American Philosophical Society, Alter is the Class of 1937 Professor of Hebrew and Comparative Literature at the University of California, Berkeley.
[Alter’s] achievement is monumental, marked by literary grace and intelligent commentary.
— New York Times Book Review

[Alter’s] accomplishment…is almost absurdly impressive. One wants to call it titanic or Olympian or even heroic, but those are the wrong words—pagan words. Alter will have to settle for one of the God-fearing Hebraic terms of praise that stipple his text: ‘righteous’ or ‘strong’ or, simply, ‘wise.’
— Adam Gopnik - New Yorker