The Story of Western Science: From the Writings of Aristotle to the Big Bang Theory (Hardcover) 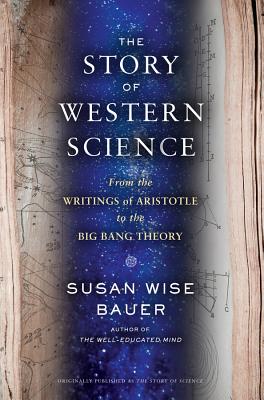 The Story of Western Science: From the Writings of Aristotle to the Big Bang Theory (Hardcover)

A riveting road map to the development of modern scientific thought.

In the tradition of her perennial bestseller The Well-Educated Mind, Susan Wise Bauer delivers an accessible, entertaining, and illuminating springboard into the scientific education you never had. Far too often, public discussion of science is carried out by journalists, voters, and politicians who have received their science secondhand. The Story of Western Science shows us the joy and importance of reading groundbreaking science writing for ourselves and guides us back to the masterpieces that have changed the way we think about our world, our cosmos, and ourselves.

Able to be referenced individually, or read together as the narrative of Western scientific development, the book's twenty-eight succinct chapters lead readers from the first science texts by Hippocrates, Plato, and Aristotle through twentieth-century classics in biology, physics, and cosmology. The Story of Western Science illuminates everything from mankind's earliest inquiries to the butterfly effect, from the birth of the scientific method to the rise of earth science and the flowering of modern biology.

Each chapter recommends one or more classic books and provides entertaining accounts of crucial contributions to science, vivid sketches of the scientist-writers, and clear explanations of the mechanics underlying each concept. The Story of Western Science reveals science to be a dramatic undertaking practiced by some of history's most memorable characters. It reminds us that scientific inquiry is a human pursuit—an essential, often deeply personal, sometimes flawed, frequently brilliant way of understanding the world.

The Story of Western Science is an "entertaining and unique synthesis" (Times Higher Education), a "fluidly written" narrative that "celebrates the inexorable force of human curiosity" (Wall Street Journal), and a "bright, informative resource for readers seeking to understand science through the eyes of the men and women who shaped its history" (Kirkus).

Previously published as The Story of Science.

Susan Wise Bauer is a writer, educator, and historian. Her previous books include the Writing With Ease, Writing With Skill, and Story of the World series from Well-Trained Mind Press, as well as The Well-Trained Mind: A Guide to Classical Education at Home, The Well-Educated Mind: A Guide to the Classical Education You Never Had, Rethinking School, The Story of Western Science: From the Writings of Aristotle to the Big Bang Theory, and the History of the World series, all from W. W. W. Norton. She has a Ph.D. in American Studies from the College of William & Mary in Virginia, as well as an M.A. in seventeenth-century literature and a Master of Divinity in Ancient Near Eastern Languages and Literature. For fifteen years, she taught literature and composition at the College of William and Mary.

[A]llows readers to hear the voices of history’s most influential researchers…. A canny narrative. Ms. Bauer’s guidebook exposes the underlying meaning and significance of each work, as well as its context in the overall development of science.
— Alan Hershfeld - Wall Street Journal

A bright, informative resource for readers seeking to understand science through the eyes of the men and women who shaped its history.
— Kirkus Reviews