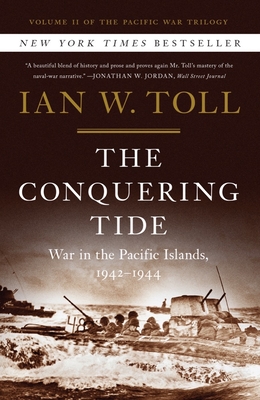 This is book number 2 in the The Pacific War Trilogy series.

The devastation of Pearl Harbor and the American victory at Midway were prelude to a greater challenge: rolling back the vast Japanese Pacific empire, island by island.

This masterful history encompasses the heart of the Pacific War—the period between mid-1942 and mid-1944—when parallel Allied counteroffensives north and south of the equator washed over Japan's far-flung island empire like a "conquering tide," concluding with Japan's irreversible strategic defeat in the Marianas. It was the largest, bloodiest, most costly, most technically innovative and logistically complicated amphibious war in history, and it fostered bitter interservice rivalries, leaving wounds that even victory could not heal.

Often overlooked, these are the years and fights that decided the Pacific War. Ian W. Toll's battle scenes—in the air, at sea, and in the jungles—are simply riveting. He also takes the reader into the wartime councils in Washington and Tokyo where politics and strategy often collided, and into the struggle to mobilize wartime production, which was the secret of Allied victory. Brilliantly researched, the narrative is propelled and colored by firsthand accounts—letters, diaries, debriefings, and memoirs—that are the raw material of the telling details, shrewd judgment, and penetrating insight of this magisterial history.

This volume—continuing the "marvelously readable dramatic narrative" (San Francisco Chronicle) of Pacific Crucible—marks the second installment of the Pacific War Trilogy, which will stand as the first history of the entire Pacific War to be published in at least twenty-five years.

Ian W. Toll is the author of the New York Times bestsellers The Conquering Tide, Pacific Crucible, and Six Frigates, winner of the Samuel Eliot Morison Award and the William E. Colby Award. He lives in New York.

A beautiful blend of history and prose and proves again Mr. Toll’s mastery of the naval-war narrative, carrying the reader smoothly from the marble halls of Washington to the Pacific’s gritty, red-stained beaches.
— Jonathan W. Jordan - Wall Street Journal

A gripping narrative of the central Pacific campaign…. Toll is strong on the operational details of battle, but he is no less skilled at presenting something that is frequently missing from military histories, a well-rounded depiction of the home front on both sides.
— Walter R. Borneman - New York Times Book Review

In The Conquering Tide, Ian Toll takes his place as one of the great storytellers of war. He is equally vivid and commanding describing landing on a carrier at night, making grand strategy in Washington, and brawling in a bar in Australia. Toll is a master; he is writing for the ages.

— Evan Thomas, author of Sea of Thunder and Ike's Bluff

A lucid and learned exposition of the grand chess match between high commanders in the middle years of the Pacific War, vividly evoking the grit and gristle of its many horrors and triumphs. Ian W. Toll is a superb historian whose writing appeals to both the head and the heart.
— James D. Hornfischer, author of Neptune’s Inferno: The U.S. Navy at Guadalcanal