Everything Under the Heavens: How the Past Helps Shape China's Push for Global Power (Hardcover) 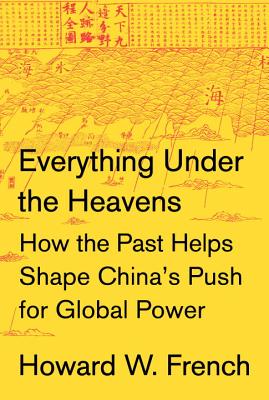 Everything Under the Heavens: How the Past Helps Shape China's Push for Global Power (Hardcover)


Email or call for price
From the former New York Times Asia correspondent and author of China's Second Continent, an incisive investigation of China's ideological development as it becomes an ever more aggressive player in regional and global diplomacy.

For many years after its reform and opening in 1978, China maintained an attitude of false modesty about its ambitions. That role, reports Howard French, has been set aside. China has asserted its place among the global heavyweights, revealing its plans for pan-Asian dominance by building its navy, increasing territorial claims to areas like the South China Sea, and diplomatically bullying smaller players. Underlying this attitude is a strain of thinking that casts China's present-day actions in decidedly historical terms, as the path to restoring the dynastic glory of the past. If we understand how that historical identity relates to current actions, in ways ideological, philosophical, and even legal, we can learn to forecast just what kind of global power China stands to become--and to interact wisely with a future peer.

Steeped in deeply researched history as well as on-the-ground reporting, this is French at his revelatory best.
HOWARD W. FRENCH wrote from Africa for The Washington Post and at The New York Times was bureau chief in Central America and the Caribbean, West and Central Africa, Japan, and China. He is the recipient of two Overseas Press Club awards and a two-time Pulitzer Prize nominee. He is the author of A Continent for the Taking: The Tragedy and Hope of Africa and China's Second Continent: How a Million Migrants Are Building a New Empire in Africa; he has written for The Atlantic, The New York Review of Books, The New York Times Magazine, and Rolling Stone, among other national publications. He is on the faculty of the Columbia University Graduate School of Journalism.

"Stimulating... This book is a reminder that China’s international relations take place in a historical context going back centuries if not millennia, and Mr. French is an engaging guide through that deeper history." —The Wall Street Journal

“A look at China from the inside as well as from the outside. French knows the country well… He stresses a political history that helps illuminate territorial conflicts between China and its neighbors.” —The New Yorker

“[An] essential reminder about the unparalleled influence of the past on China’s political present… One of the most lucid and illuminating books on China’s conception of power and its place in the world… Fascinating.” —The Times Literary Supplement

"Lively and illuminating." —The Guardian

"Impressive... Masterful... An excellent introduction to the complex issues of East Asia and the potential for conflict in this critical region of the world." —New York Journal of Books

"Howard W. French makes it clear China’s sense of national superiority is of more than historical significance... Chilling." —The Globe and Mail

“French combines wide scholarship with the instinct of a dogged reporter... Fascinating.” —The Irish Times

“French has curated a history of China’s foreign relations by the light of which current events can be read… A valuable resource for the continuity in the Chinese approach over time.” —The Japan Times

“Nuanced… The detail of [French’s] scholarship and reporting is matched by the suppleness of his prose… This will be a useful, and necessary, starting point for informed discussion.” —Publishers Weekly

"Howard French has tackled what is perhaps the most important issue of our time, and of many years to come, with the vivid prose of a first-rate reporter, the scholarship of an excellent historian, and great human sympathy.” —Ian Buruma, author of Year Zero: A History of 1945

“Everything Under the Heavens is the most persuasive account I’ve ever read of how China's history shapes its foreign policy and that of its neighbors today. A subtle and beautifully written book that offers surprising lessons for how Americans and Asians should respond to China’s rise. Strongly recommended for policy makers and citizens alike.” —Susan Shirk, chair of the 21st Century China Center, University of California-San Diego

“Taking full account of China's achievements and ambitions, without being panicked by them or losing sight of China's vulnerabilities, will be a major challenge for the next generation in the rest of the world—and in China itself. Howard French very lucidly lays out a guide to thinking about the next stage in China's evolution, and the positive signs and danger signals to be watching for.” —James Fallows, author of China Airborne

“In the brilliant Everything Under the Heavens, Howard French offers a sweeping historical view of China’s relentless attempt to build an Asian world order around its unchallenged authority. French’s meticulously reported and beautifully written book is disquieting but essential reading.” —Nayan Chanda, former editor of the Far Eastern Economic Review

“In Everything Under the Heavens, Howard French has written an absorbing and penetrating dissection of the deep roots of China's claims to large swathes of the oceans off Japan and south-east Asia, with profound implications for control over vitally important global trade. French understands that China's sense of historical entitlement is both deeply emotional and crudely political, and allows Beijing to pretend to stand with Asia, while standing over it at the same time.” —Richard McGregor, author of The Party: The Secret World of China's Communist Rulers

“With Everything Under the Heavens, Howard French brings us a wonderfully well-researched and elegantly written book about what we might call China’s ‘shape memory.’ If you’re wondering why this singular country acts as it does, this volume will go a long way to explaining it." —Orville Schell, Arthur Ross Director, Center on US-Relations, Asia Society