My Mother/My Self: The Daughter's Search for Identity (Paperback) 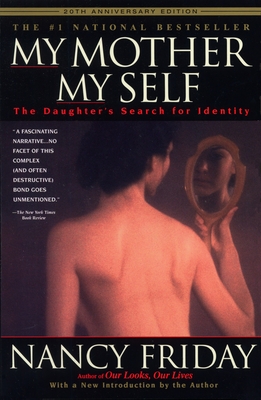 My Mother/My Self: The Daughter's Search for Identity (Paperback)


Usually Ships in 1-5 Days
When Nancy Friday began her research for My Mother/My Self in the early 1970’s no work existed that explored the unique interaction between mother and daughter. Today psychotherapists throughout the world acknowledge that if women are to be able to love without possessing, to find work that fulfills them, and to discover their full sexuality, they must first acknowledge their identity as separate from their mother’s. Nancy Friday’s book played a major role in that acceptance. The greatest gift a good mother can give remains unquestioning love planted deep in the first year of life, so deep and anassailable that the tiny child grown to womanhood is never held back by the fear of losing that love, no matter what her own choice in love, sexuality, or work may be.

Through candid self-disclosure and hundreds of interviews, Friday investigates a generational legacy and reveals the conflicting feelings of anger, hate, and love the daughter’s hold for their mothers–and why they so often “become” that mother themselves.
Nancy Friday established herself as a magazine journalist in New York, England, Italy and France before turning to writing full time and publishing her first book, My Secret Garden, in 1973, which became a bestseller; Friday has regularly returned to the interview format in her subsequent books on themes ranging from mothers and daughters to sexual fantasies, relationships, jealousy, envy, feminism and beauty.

Her writings argue that women have often been reared under an ideal of womanhood which was outdated and restrictive, and largely unrepresentative of many women's true inner lives, and that openness about women's hidden lives could help free women to truly feel able to enjoy being themselves. She asserts that this is not due to deliberate malice, but due to social expectation, and that for women's and men's benefit alike it is healthier that both be able to be equally open, participatory and free to be accepted for who and what they are.