The Curse of Chalion (Hardcover) 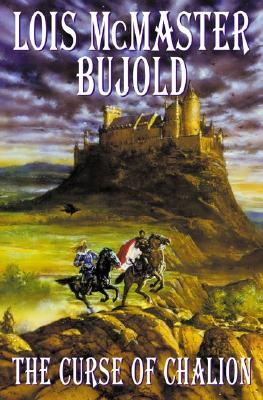 By Lois McMaster Bujold
$25.00
Email or call for price

In a dazzling display of invention and storytelling, the incomparable Lois McMaster Bujold offers us the razor-keen edge of a very different sword...

The Curse of Chalion

On the eve of the Daughter's Day -- the grand celebration that will honor the Lady of Spring, one of the five reigning deities -- a man broken in body and spirit makes his way slowly down the road to Valenda. A former courtier and soldier, Cazaril has survived indignity and horrific torture as a slave aboard an enemy galley. Now he seeks nothing more than a menial job in the kitchens of the Dowager Provincara, in the noble household where he served as page in his youth.

But the gods have greater plans for this humbled man. Welcomed warmly, clothed and fed, he is named, to his great surprise, secretary tutor to the Royesse Iselle -- the beautiful, strong-willed sister of the impetuous boy who is destined to be the next ruler of the land. But the assignment must ultimately carry Cazaril to the one place he fears even more than the sea: to the royal court of Cardegoss, rife with intrigues and lethal treacheries.

In Cardegoss, the powerful enemies who once placed Cozoril in chains and bound him to a Roknori oar now occupy the most lofty positions in the realm, beneath only the Roya himself. Yet something for more sinister than their scheming hangs like a sword over the royal family: a curse of the blood that taints not only those who would rule, but those who stand in their circle. The life and future of both Iselle and her entire blighted House of Cholion lie in dire peril. The only recourse left to her loyal, damaged servant is the employment of the darkest and most forbidden of magics -- a choice that Will indelibly mark Cazaril as a tool of the miraculous ... and trap him, flesh and soul, in a maze of demonic paradox, damnation, and death for as long as he dares walk the five-fold pathway of the gods.

Only Robert A. Heinlein has won more Hugo Awards for Best Novel than Lois McMaster Bujold, a singularly lauded author whose work has been compared to Jane Austen's. Now channeling her remarkable storytelling genius in an exciting new direction, she creates a riveting tale rich in atmosphere, magic, character, and consequence that twists and turns in unanticipated ways. Much more than simply the next eagerly awaited tour de force by Lois McMaster Bujold, The Curse of Chalion is a stunning masterwork of fantastic invention that demonstrates the vast range of her astonishing tolents -- and elevates her into the pantheon of premier contemporary fantasists.