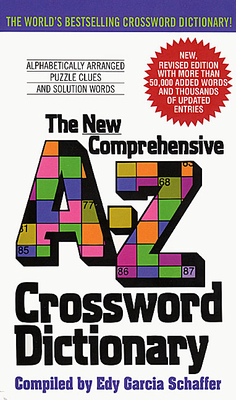 With more than 50,000 new words added and now over 225,000 entries total! The New Comprehensive A-Z Crossword Dictionary, the world's most extensive, up-to-the-minute and easy-to-use crossword puzzle dictionary is bigger and better than ever!

Arranged alphabetically from start to finish, this updated and revised edition is a boon for puzzle fans young and old-with thousands of updated references from the worlds of art, literature, sports, politics, and pop culture; geographical and technical terms; famous and not-so-famous figures from the past and present; biblical references; computer terminology; new and old words; variant spellings; idioms, slogans, slang, abbreviations ... and much more!

Mrs. Schaffer's decision to produce a new edition under her sole authorship was inspired by the remarkable performance of A-Z, thanks to the splendid response from the literary society of crossword puzzle enthusiasts. The author dedicated years of painstaking, extensive compilation and research work to bring this edition to fruition. Mrs. Schaffer takes great pride in her accomplishment and she assures that the same proven quality of excellence demonstrated in the original A-Z dictionary has been sustained throughout her ensuing version, which crossword puzzle buffs will find to be a substantially improved and expanded compilation of useful and expedient clues and solutions. She is ever grateful to her patrons and it is her hope that all crossword puzzle devotees will come to depend on this valuable aid and reliable reference, and will want to own a copy of her new dictionary.

Mrs. Schaffer hails from the Philippines originally and has three sisters and two brothers. Due to the early loss of both parents, Edy's ambition to be a criminal lawyer remained unfulfilled. After high school, she supported herself during a two-year secretarial course, which she successfully completed in half the time. Her formal education was later broadened, thanks to an employer's sponsorship of her studies at the American Institute of Banking in San Francisco, California. She then held positions ranging from senior stenographer, secretary, liaison officer, executive administrator to general manager of various trade firms and banking institutions in the Philippines, Guam, and California.

Mrs. Schaffer migrated to the United States in 1969, following her marriage to Art Schaffer, her husband of twenty-six years. She is enjoying a blissful life in her adopted country with her loving husband and their children: Karl, Bobby, Lynn, Ruby, and Venus; and their eleven lovely grandchildren: Tanya, Liza, Jacquelyn, Eddie, Joel, Ricky, Eric, Robert, Jennifer, Jade Benae, and Jon Benjamin.

Edy is now devoting her time to the pleasures of grannyhood and traveling with her husband all over scenic America.