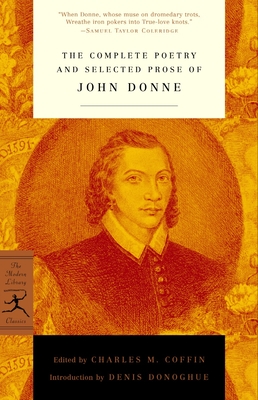 
Usually Ships in 1-5 Days
This Modern Library edition contains all of John Donne's great metaphysical love poetry. Here are such well-known songs and sonnets as "A Valediction: Forbidding Mourning," "The Extasie," and "A Nocturnall Upon S. Lucies Day," along with the love elegies "Jealosie," "His Parting From Her," and "To His Mistris Going to Bed." Presented as well are Donne's satires, epigrams, verse letters, and holy sonnets, along with his most ambitious and important poems, the Anniversaries. In addition, there is a generous sampling of Donne's prose, including many of his private letters; Ignatius His Conclave, a satiric onslaught on the Jesuits; excerpts from Biathanatos, his celebrated defense of suicide; and his most famous sermons, concluding with the final "Death's Duell." "We have only to read [Donne]," wrote Virginia Woolf, "to submit to the sound of that passionate and penetrating voice, and his figure rises again across the waste of the years more erect, more imperious, more inscrutable than any of his time."
Denis Donoghue is University Professor and Henry James Chair of English and American Letters at New York University. He is the author of more than a dozen books, including, most recently, Words Alone: The Poet T.S. Eliot (Yale University Press).
"When Donne, whose muse on dromedary trots, Wreathe iron pokers into True-love knots."