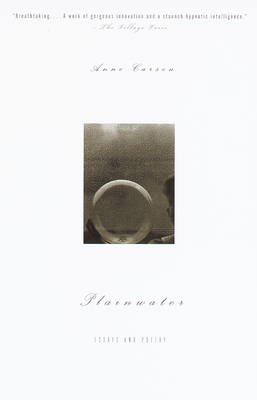 
Usually Ships in 1-5 Days
The poetry and prose collected in Plainwater are a testament to the extraordinary imagination of Anne Carson, a writer described by Michael Ondaatje as "the most exciting poet writing in English today." Succinct and astonishingly beautiful, these pieces stretch the boundaries of language and literary form, while juxtaposing classical and modern traditions.

Carson envisions a present-day interview with a seventh-century BC poet, and offers miniature lectures on topics as varied as orchids and Ovid. She imagines the muse of a fifteenth-century painter attending a phenomenology conference in Italy. She constructs verbal photographs of a series of mysterious towns, and takes us on a pilgrimage in pursuit of the elusive and intimate anthropology of water. Blending the rhythm and vivid metaphor of poetry with the discursive nature of the essay, the writings in Plainwater dazzle us with their invention and enlighten us with their erudition.
ANNE CARSON was born in Canada and has been a professor of Classics for over thirty years. Her awards and honors include the Lannan Award, the Pushcart Prize, the Griffin Trust Award for Excellence in Poetry, and fellowships from the Guggenheim and MacArthur Foundations.
"Breathtaking. . . . A work of gorgeous innovation and a staunch hypnotic intelligence."--The Village Voice

"Carson has . . . created an individual form and style for narrative verse. . . . Seldom has Pound's injunction 'Make It New' been so spectacularly obeyed." --The New York Review of Books

"Anne Carson is a philosopher of heartbreak."   --The Nation