The Elegant Universe: Superstrings, Hidden Dimensions, and the Quest for the Ultimate Theory (Paperback) 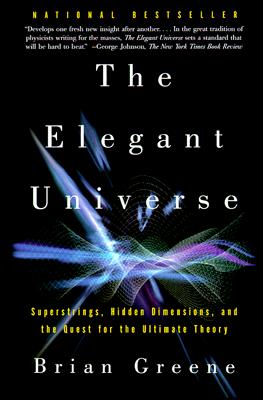 The Elegant Universe: Superstrings, Hidden Dimensions, and the Quest for the Ultimate Theory (Paperback)

"[Greene] develops one fresh new insight after another...In the great tradition of physicists writing for the masses, The Elegant Universe sets a standard that will be hard to beat." --George Johnson, The New York Times Book Review

In a rare blend of scientific insight and writing as elegant as the theories it explains, Brian Greene, one of the world's leading string theorists, peels away the layers of mystery surrounding string theory to reveal a universe that consists of 11 dimensions where the fabric of space tears and repairs itself, and all matter-from the smallest quarks to the most gargantuan supernovas-is generated by the vibrations of microscopically tiny loops of energy.

Green uses everything from an amusement park ride to ants on a garden hose to illustrate the beautiful yet bizarre realities that modern physics is unveiling.    Dazzling in its brilliance, unprecedented in its ability to both illuminate and entertain, The Elegant Universe is a tour de force of science writing-a delightful, lucid voyage through modern physics that brings us closer than ever to understanding how the universe works.

Brian Greene is a professor of physics and mathematics at Columbia University. He lives in New York City.

"The Elegant Universe is compulsively readable.... Greene threatens to do for string theory what Stephen Hawking did for black holes."  -New York

"[An] important book.... The Elegant Universe presents the ideas and aspirations-and some of the characters-of string theory with clarity and charm."  -Scientific American

"As good as it gets.... [A] thrilling ride through a lovely landscape."  -Los Angeles Times

"[Greene] writes with poetic eloquence and style.... [He] does an admirable job of translating a wholly mathematical endeavor into visual terms."  -The Washington Post Book World

"String theory is the hottest idea to emerge in physics since Stephen Hawking gazed into a black hole.... [Greene] explain[s] it in terms that anyone can understand."  -San Francisco Chronicle