Cinderella and Company: Backstage at the Opera with Cecilia Bartoli (Paperback) 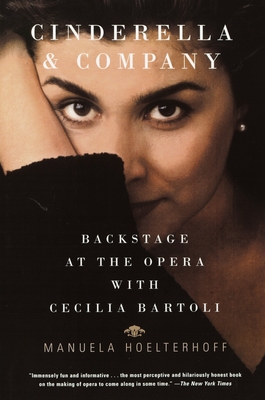 Cinderella and Company: Backstage at the Opera with Cecilia Bartoli (Paperback)


Usually Ships in 1-5 Days
A wickedly funny look at opera today--the feuds and deals, maestros and managers, divine voices and outsized egos--and a portrait of the opera world's newest superstar at a formative point in her life and career.
In Cinderella & Company, Pulitzer Prize-winning journalist Manuela Hoelterhoff takes us on a two-year trip on the circuit with Cecilia Bartoli, the young mezzo-soprano who has captured an adoring public around the world.
Rossini's Cenerentola is Bartoli's signature role, and Cinderella & Company tells the fairy-tale story of her life, which started on a modest street in Rome where the Fiat was the coach of choice. The lucky break, the meteoric rise, the starlit nights and nail-chewing days are all part of a narrative that shows Bartoli rehearsing, playing, traveling, eating, and charming us with her vivacity and dazzling virtuosity.
Along the way, Hoelterhoff gives us an unusually vivid, behind-the-scenes look at the opera world. The first stop is Houston, where Bartoli brightens a droopy Cenerentola production; later scenes follow her to Disney World and to the Metropolitan Opera, where a fidgety cast awaits the flight-phobic mezzo's arrival for Mozart's Cosi fan tutte. Traveling to Santa Fe, Paris, Rome, Venice, and London, Hoelterhoff drops in on opening nights and boardroom meetings, talks to managers and agents, describes where the money comes from, and survives one of the longest galas in history.
Here too are tantalizing glimpses of divinities large and small: Kathleen Battle's famously chilly limousine ride; Plácido Domingo flying through three time zones to step into the boots of an ailing Otello; Luciano Pavarotti aiming for high C in his twilight years. And we meet the present players in Bartoli's world: Roberto Alagna and Angela Gheorghiu, a.k.a. the Love Couple; Jane Eaglen, the Wagnerian web potato monitoring her cyberspace fan mail; the appealing soprano Renée Fleming, finally on the brink of stardom.
At once informed and accessible, Cinderella & Company brings the world of grand opera into sharp focus--right up to the last glimpse of Cecilia Bartoli waving triumphantly from Cinderella's wedding cake.
Manuela Hoelterhoff received a Pulitzer Prize for cultural criticism at the Wall Street Journal, where she has served as arts and books editor and is now a member of the editorial board; she is also senior consulting editor for SmartMoney and a contributing editor to Condé Nast Traveler. In addition, Ms. Hoelterhoff is the author of the libretto for Modern Painters, an opera by David Lang based on the life of John Ruskin, which had its world premiere at the Santa Fe Opera in 1995. She lives in New York City.